This picture is the Sept. 13, 1963 cover of Time magazine. Headlined “Red China, An Arrogant Outcast”, it portrays a lot of problems in China. On the top of the boat are Mao Zedong, Liu Shaoqi, Zhou Enlai and Deng Xiaoping. In the very crowded, patched dragon boat, people uphold banners reading “Down With Nikita Khrushchyov, Capitalism” and the portraits of Stalin, Lenin and Nikita Khrushchev; some people are going to fire a Chinese missile at the end of the boat; some fell off into the water and some are trying to climb back onto the boat . Considering the historical background of that time, we can easily get the hint of the picture. China was parting from Khrushchev’s revisionism and the two leaders were at odds with each other. At the same time, CCP wanted to be the new socialist leader, replacing the Soviet Russia. The broken boat and the crazy crowd portray the artist’s vision of an out-of-control China. The disaster scene in the water indicates the Cultural Revolution which begins 3 years later. 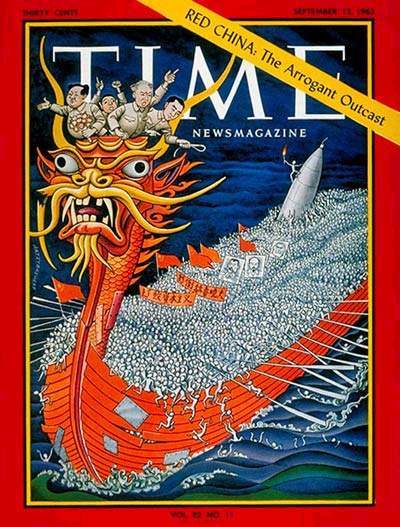