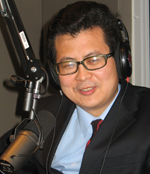 Guo’s wife Zhang Qing confirmed the arrest, on suspicion of “running an illegal business’, but told reporters she had refused to sign the papers shown her by police.

“I think a lot of damage has been done to the civil rights movement with the arrest of Guo and Gao,” rights lawyer Teng Biao, who was on the legal team of Shandong-based blind family planning activist Chen Guangcheng, told RFA’s Mandarin service.

“Little Cause For Optimism” in Shadow of Pu Zhiqiang Case