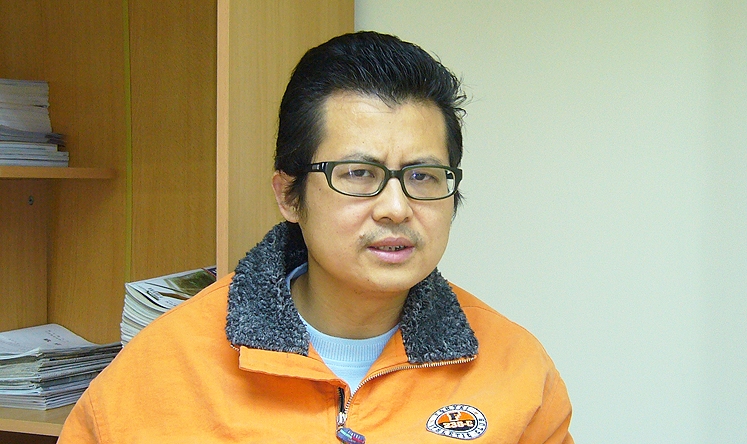 Writer, human rights lawyer, and free speech activist Yang Maodong, also known by his pen name Guo Feixiong, was arrested for “gathering a crowd to disrupt public order” after participating in the 2013 Southern Weekly anti-censorship protests in Guangzhou. He first stood trial in November 2014 after his lawyers boycotted an earlier court session in protest of procedural violations. The Guardian’s Tom Phillips reports that Guo has now been sentenced to six years in prison, and fellow Guangzhou activist Sun Desheng to two and a half years:

A prominent Chinese activist who described himself as a foot soldier in the battle for democracy has been jailed for six years in the latest chapter of president Xi Jinping’s war on dissent.

[…] A second activist, Sun Desheng, was also jailed for two and a half years on Friday for allegedly “assembling a crowd to disrupt public order”.

[…]“One of the biggest issues is that they have locked Guo Feixiong up for [more than] two years in a very small and confined space, where he hasn’t been able to move around,” said Zhang Qing, [Guo’s wife, who now lives in Texas].

“He hasn’t been allowed outside for exercise, or to see sunlight, and this has done huge damage to his health. I think that this has already turned into a form of deliberate harm; it’s a slow form of torture,” Zhang added.

“This is a form of political persecution, and it’s a form of physical abuse and torture to lock him up in such a terrible environment for such a long time.”

Zhang Lei, the activists’ lawyer, said his client was now in a very bad physical and mental state. […] [Source]

In August, China Change reported that Guo had not been allowed fresh air in his more than two years of detention, a type of mistreatment they have also described as becoming routine—and sometimes fatal—for political prisoners in China.

Liu Yuandong, another arrested in 2013 after the Southern Weekly protests, was also sentenced to three years by the Guangzhou court. The sentencing of Guo, Liu, and Sun comes amid an ongoing crackdown on civil society, the freedom of speech, and legal advocacy under President Xi Jinping. Amnesty International has condemned the prison sentences for Guo, Sun, and Liu as a “clear-cut act of political persecution,” and called for their immediate release.

The New York Times’ Chris Buckley notes outrage from Guo and his lawyers over the last-minute addition of the charge “picking quarrels and provoking trouble,” a charge that has become increasingly common in Xi’s China:

[…T]he Tianhe District People’s Court in Guangzhou, the capital of Guangdong Province, erupted in denunciations from Mr. Yang [Maodong, aka Guo Feixiong] and his lawyers when the presiding judge revealed that he had added a new charge against the defendant — one that his lawyers had been given no chance to defend him against.

The new charge, “picking quarrels and provoking trouble,” meant that Mr. Yang would spend an additional two years in prison, according to his lawyers. Mr. Yang, who stood trial almost exactly a year ago, was convicted Friday on that charge and the original one and was sentenced to a total of six years.

“This verdict is persecution. It violates rule of law,” Mr. Yang told the court in a firm voice as two guards held him by the arms, Zhang Lei, one of his two lawyers, recounted later Friday.

[…] The judge had told the two lawyers of the new charge that morning, and they had had no chance to discuss the change with their client before the hearing, they said. [Source]

Guo Feixiong earlier served five years in prison after publishing a book about a political scandal in Liaoning. Upon his release in 2011, Guo affirmed his continued conviction to defending human rights in China.

The New York Times has translated and published a statement by Guo denouncing the court decision, written in anticipation of the sentencing:

This verdict violates justice and the law. This is heinous political persecution of me and Sun Desheng by China’s dark antidemocratic forces. We are completely innocent.

Hidden deep inside the law is the voice of essence and dignity. “You … have neglected the weightier provisions of the law: justice and mercy and faithfulness.” Your verdict, however, tramples on justice, violates humanity and wrecks rudimentary procedural justice.

You have concocted an unjust political case against us, who were uprightly exercising our civic and political rights. You have used judicial institutions that should have been applied to uphold justice and safeguard human rights to frame innocent citizens, crush human rights and trample on the core interest of the Chinese nation — the cause of constitutional democracy.

Your conduct has a very clear criminal intent, and the circumstances are particularly serious. This is evil beyond evil. Your actions have gravely violated criminal law. In a future of democracy and rule of law, the courts will judge your crimes in a just way and shine a humane light on your character, which for so long has been permeated with brutishness, greed, fear and hatred.

[…] I will tell you the truth: It is impossible for your shameful political persecution to achieve the political goal of oppressing China’s mighty tide of democracy. On the contrary, it will only help the people of the world to recognize your antidemocratic nature. It will only make more citizens stand up bravely either out of anger or enlightenment, rising like mountains and joining our ranks. […] [Source]

Earlier this week, 71-year-old journalist Gao Yu was granted a two-year sentence reduction and allowed medical release. This required her to again confess her guilt—a stipulation she was initially unwilling to meet. Her lawyers and rights organizations cautioned against viewing this as a sign that the Xi administration’s crackdown was lessening, and the three recent prison sentences seem to affirm that warning.

The heavy sentence came as shock to everyone following the case. More shockingly, the court added a charge right in the courtroom in order, apparently, to deliver a heavier sentence. Li Jinxing (李金星), one of Guo’s two lawyers, posted online that, after the court had completed its questioning, judge Zheng Xin (郑昕) said that it is the opinion of the court that an additional charge should be added to the original “gathering a crowd to disrupt order of a public place”—that is, “picking quarrels and provoking trouble.” He demanded that the lawyers immediately provide a defense of this charge. The four lawyers (including two of co-defendant Sun Desheng’s counsel in the same case) objected in the strongest terms. “In terms of legal court procedure, when the Procuratorate has accused the defendant of one crime, the court can’t simply add another one, and sentence the person for two crimes,” Li Jinxing told Radio Free Asia in an interview. “I believe that the court’s action was simply to increase the sentence in total disregard for the law. I see this as one of the most ugly and preposterous precedents in judicial history. It is uncloaked political vendetta, false charges, and persecution of human rights defenders.”

[…] Guo Feixiong attempted to speak, believing that the decision was a case of naked political persecution of a democracy activist. Before he finished he was dragged out of the courtroom.

[…] Lawyer Zhang Lei added: “This is an extremely dark day in judicial history: when the prosecutors have not even brought the charge against the defendant, the court simply adds it to the crimes of the defendant, increasing their sentence length. This is a great scandal. It’s simply toying with the law, blaspheming the law.” [Source]