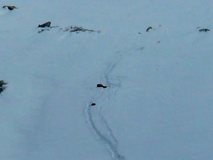 From International Campaign for Tibet:

Video footage of Tibetans who were crossing into Nepal being shot by Chinese border police on September 30 refutes official claims that the troops fired “in self-defence”.

The video footage, taken by a Romanian cameraman who was at advance base camp on Mount Cho Oyo at the time, depicts a line of Tibetans walking uphill through the snow on the Nangpa Pass when a shot is heard and one of the figures falls to the ground. The video clearly depicts that the Tibetans had their backs to the soldiers, were unarmed, and offered no resistance. The nun who died, Kelsang Namtso, appears to have been shot in the back. [Full Text]

The Geopolitics of Earthquake Relief in Nepal

The Gulf Between Tibet and Its Exiles