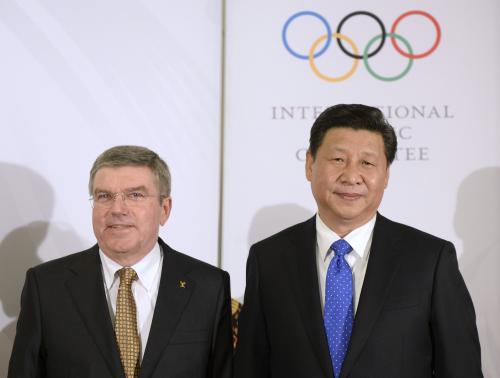 On Friday July 31, the International Olympic Committee (IOC) will meet in Kuala Lumpur to elect the host city for the 2022 Winter Olympics. Since Oslo withdrew its bid late last year, the contest has been between the capital cities of China and Kazakhstan. With the IOC decision looming, Beijing has launched its final promotional drive to shore up a successful bid. From Malaysia, the AFP reports the points of competition between Beijing and Almaty:

Beijing Olympic officials on Monday shrugged off questions over snow levels and spread-out venues in their 2022 Winter Games bid as they launched their final pitch in Malaysia ahead of an IOC vote this week.

[…]The Chinese capital is overwhelmingly favoured, but Almaty has gained ground by promising plentiful natural snow and concentration of facilities near the city.

But Beijing bid officials said the lack of snow in arid northern China and far-flung venues would not be a problem, while touting the organisational muscle that China flexed in its successful 2008 Summer Games.

[…] “We have two excellent candidates,” IOC president Thomas Bach said last week on a visit to Moscow. “The choice will not be easy.” [Source]

While Beijing may have the upper hand in terms of prior hosting experience, and Almaty a climate more naturally accommodating to winter games, both are the government seats of countries with less that perfect human rights records. This should be cause for IOC concern, as the Olympic Charter has since 1991 stated a commitment to “placing sport at the service of the harmonious development of humankind, with a view to promoting a peaceful society concerned with the preservation of human dignity,” near the top of its “Fundamental Principles of Olympism.” Beijing’s hosting of the 2008 summer games led to several related human rights controversies, as did last year’s winter games in Sochi, Russia. Last December, the IOC signaled a deepening commitment to the “preservation of human dignity” when the unanimously agreed on a set of recommendations known as “Olympic Agenda 2020,” included several aimed squarely at protecting human rights. Human Rights Watch last week called on the IOC to hold the bid-winning government, be it Kazakhstan or China, to task under the new rules:

“Whether China or Kazakhstan wins the honor of hosting the 2022 Winter Games, the IOC will face an extreme test of its new commitment to improve human rights protections,” said Minky Worden, Global Initiatives director at Human Rights Watch. “The International Olympic Committee should insist that the host country rigorously comply with the Olympic Charter and basic human rights rules – or risk losing the right to host the games.”

[…] “The 2022 Winter Games are when the rubber meets the road for the IOC in terms of backing core principles,” Worden said. “Knowing that either way the selection process goes, a serious rights abuser will host the Games, the IOC should require meaningful rights protection in host city contracts, and monitor those commitments as rigorously as it monitors stadium construction, telecommunications, and other requirements.”

The IOC visited both countries earlier in 2015 to evaluate conditions as part of the bid process. But the official reports did not adequately identify the serious human rights concerns. […]

[…] “We’ve already seen one Olympic Games fuel human rights abuses in China, and the environment in 2015 is significantly worse than it was in 2008,” Worden said. [Source]

See HRW’s focus pages on Kazakhstan and China/Tibet for details on both countries’ human rights records.

This week, a group of prominent Chinese rights advocates—including Chen Guangcheng, Hu Jia, Xia Yeliang, Wen Yunchao, and many others—released a petition to the IOC to snub Beijing’s bid in response to China’s worsening human rights conditions, citing as grounds for rejection Beijing’s broken promises during the 2008 Olympics, and its widening crackdown on civil society and free speech under Xi Jinping. From the petition:

As we write this letter, the Chinese government is carrying out an unparalleled attack on civil society. More than 250 Chinese human-rights lawyers, legal assistants, activists and their family members have been arrested, interrogated, put under house arrest and made to disappear since July 9. The youngest is 16 and the oldest 81.

Beijing has been using the Olympic Games to promote the Chinese Communist Party. If the International Olympic Committee awards Beijing the 2022 Winter Olympics, a great event intended to promote solidarity, brotherhood and human development will once again serve a corrupt dictatorship. It will endorse a government that blatantly violates human rights. Awarding Beijing the Olympics is a contradiction of the Olympics’ goal of “promoting a peaceful society concerned with the preservation of human dignity.”

The 2008 Summer Olympics made a mockery of the fine principles that the Olympics stands for, and brought more humiliation than dignity and more sadness than joy to the people in China. […] [Source]

Radio Free Asia recently interviewed Beijing-based activist Hu Jia, a signatory to the petition, on his opposition to the Olympic bid:

Handing the 2022 Winter Olympics to Beijing, which will go head-to-head with Kazakhstan’s capital Almaty in a vote for the hosting rights on July 31, would send out the wrong messages on human rights, as Beijing forges ahead with a widespread crackdown on rights lawyers, activists said.

“Lawyers are in a particularly difficult situation in China, where there are laws, but no rule of law, and where constitutionalism barely survives in the cracks,” said Hu, who served a three-and-a-half-year jail term for “incitement to subversion” after he wrote online articles critical of Beijing’s hosting of the 2008 Summer Olympics.

“Xi Jinping may preach the rule of law, but he is also its destroyer. There is nothing more ridiculous than this,” Hu told RFA ahead of the International Olympic Committee (IOC) meeting in Kuala Lumpur, which will vote to choose between the two rival cities. […] [Source]

In 2008, Golog Jigme said, he was detained and tortured after helping to produce a documentary, “Leaving Fear Behind,” that explored the mixed sentiments of ordinary Tibetans in the prelude to the 2008 Summer Games. The film’s co-producer, Dhondup Wangchen, was released last year after serving six years in prison on charges of subversion.

On July 17, Golog Jigme, now living in Switzerland, sent a letter to Mr. Bach asking if he could make his appeal face to face.

“I would very much like to show you the film in person so you can see for yourself how the Tibetan people suffer under Chinese rule, hear them speak about what they thought about the 2008 Games taking being given to China when the human rights situation for them is so awful,” he wrote in the letter, a copy of which was provided to The New York Times.

As of Monday, Mr. Bach, who also lives in Switzerland, had yet to respond. […] [Source]

If the IOC votes to award Beijing hosting rights on Friday, in 2022 the city is set to become the first to host both summer and winter Olympic games.