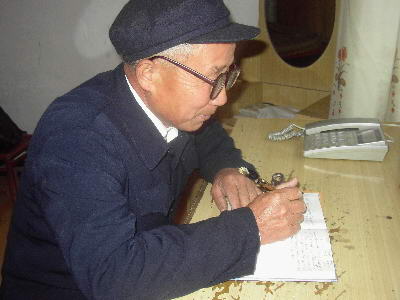 Li Haibin (ÊùéÊµ∑ÂΩ¨), one of the most educated 62-year-old farmers in his village, has been keeping a detailed finance journal all the years of his family of six, one of the most well-off at Huangxing New Village (ÈªÑÂÖ¥Êñ∞Êùë) of Huangxing Township (ÈªÑÂÖ¥Èïá) in Changsha County (ÈïøÊ≤ôÂéø), Hunan Province. He lives with his wife, his son, daughter-in-law and two granddaughters, ages 10 and 6.

Li has 6.8 mu of land, 2.8 for rice and 4 for vegetables. The family used to plant rice for all their land, but seeing more profitability of vegetables, they also made the switch. According to Li’s journal, his rice crop yielded over 2,000 kilos of grain, earning the family 2,800 yuan at a rate of 140 yuan/100 kilo. But this income has all gone to paying for chemical fertilizer, pesticide, and hiring part-time workers who help with planting and harvesting. His pigs were not doing well either, due to a dropping of price early 2006. His pigs last year sold for 2,000 yuan, not a good year. He hopes his other 19 50-kilo pigs this year can sell for 3,000 yuan, if the market goes his way.

Li’s daughter-in-law Wang Qunying (ÁéãÁæ§Ëã±), the one in charge of cash crops, plants small cucumbers, peppers, leek and cabbage. The peppers are the most profitable, selling more than 2,200 yuan at one trade before the National Day holiday. Li said some savvy veggie farmers can make 4-5,000 yuan per mu, such as a neighbor who sold tens of thousands of yuan on their small cucumbers. His family earned 4,000 yuan from their cucumbers in less than 1 mu. Out of vegetables, Li’s family made at least 10,000 yuan last year, he said.

The greatest cash earner of the family, however, is Li Daxing (ÊùéÂ§ßÂÖ¥), the son who works on construction projects laying bricks or cement. Having almost never done any farm work, Daxing makes around 1,900 a month, or 18,000 yuan a year.

On the expenses side, cash gifts and medical bills are the biggest items. Li’s daughter-in-law was hit in the head by a motorcycle, but the driver only paid 600 yuan. The family came up with the remaining bill of 10,500 yuan for more than a moth’s stay at a hospital in Changsha. Furtunately, his friends and relatives donated a total 6,000 yuan. His younger granddaughter had a minor surgery that cost 2,200 yuan, with 1,200 yuan of donations again from relatives.

Then comes all the occasions that the family shells out a so-called social connection gifts (‰∫∫ÊÉÖÈí±), or cash envelopes when a senior has a birthday, some couple get married, someone is hospitalized, a student gets into a college or joins the army, so on and so forth. Last year, Li’s family spent more than 6,000 yuan on these gifts, which didn’t include 3,000 yuan that he lost playing cards or mahjong on those occasions.

Then other major expenses included education for the granddaughters, up to 700 yuan combined, and 900 yuan for his daily grain liquor, 100 kilo for a year.

Although the family has built a new house and paid off all the debt and now has 5,000 yuan in their bank account, experts say still it remains difficult to expand income sources for farmers. Income levels for farm work, especially for planting grain, remains low and the land that most farmers rely on cannot create a lot of income for them. Migrant work is still a leading cash generator for these families. [Full Text, in Chinese]

State Council May Clamp Down on Land Grabs