As China Booms, Millions of Children Are Left Behind – WSJ 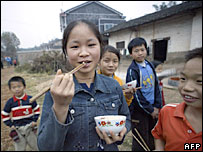 In a sparsely furnished farmhouse, about a half mile from a main road in the poor, rural province of Anhui, 16-year-old Zhao Yan has lived on her own for more than two years.

She goes to school, tends to the family rice farm and waits for her father’s periodic visits home. “I miss my dad a lot,” says the teen, dressed in jeans and a lime-colored hooded sweatshirt.

As China’s cities continue to develop, the government expects the migrant-worker population — and the numbers of left-behind children — will rise. The State Council Research Office reported in April that the 200 million people in nation’s rural migrant-labor force make an average of about $60 to $100 a month. Many of these workers were just getting by on subsistence farming before leaving. [Full Text, subscribers only]

Drawing the News: The Right to Remain Silent

1 in 5 Children Live in Rural Villages Without Parents

Symptoms of the Hukou System and a Map to Reform