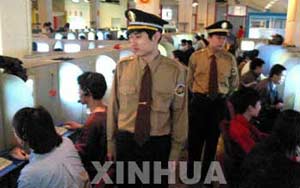 As Internet cafes have taken the brunt of the criticism of addictive gaming and computing by a large number of young Chinese, the bosses also have their complaints: endless fees or expenses to keep their business going. From Xinhua’s Tianjin, Gansu and Hebei channels, translated by CDT:

For instance in Tianjin, local Internet cafes are required, since real-name registration regime took effect, to install a few programs, such as a harmful information filtering software (Áõä‰Ω∞ËΩØ‰ª∂), 160 yuan/machine, a real-name monitoring software (Â§öÁ¶èÂèã), 165 yuan/unit and another one bundled to real-name programs (Â∏ïÂçöÊ∏©). An Internet cafe owner at Hedong district in Tianjin said that his cost for these installations was a sizeable 100,000 yuan, for his 300 machines. (Any market for piracy here?)

Another owner said he was asked to subscribe to some periodicals of some government agencies, several hundred yuan a year for a few pages per issue and only a handful of issues a year. But last year, he didn’t actually see a single issue.

A “hidden rule” has it that when it comes to major holidays, such as May Day, National Day and the Spring Festival, the cafe owners are supposed to visit regulating agencies to “build up friendship” (ËÅîÁªúÊÑüÊÉÖ), which is nothing more than delivering gifts, cash envelopes and treating officials to nice meals.

One of the owners didn’t pay his dues to Tianjin’s firefighters department, who soon sent inspectors and “found” that the doors and windows were not properly installed, demanding a fine of 100,000 yuan. Helpless, the boss got the problem solved by inviting the officials to meals and handing over gifts. [Full Text, in Chinese]

50 Websites and WeChat Accounts Shut Down