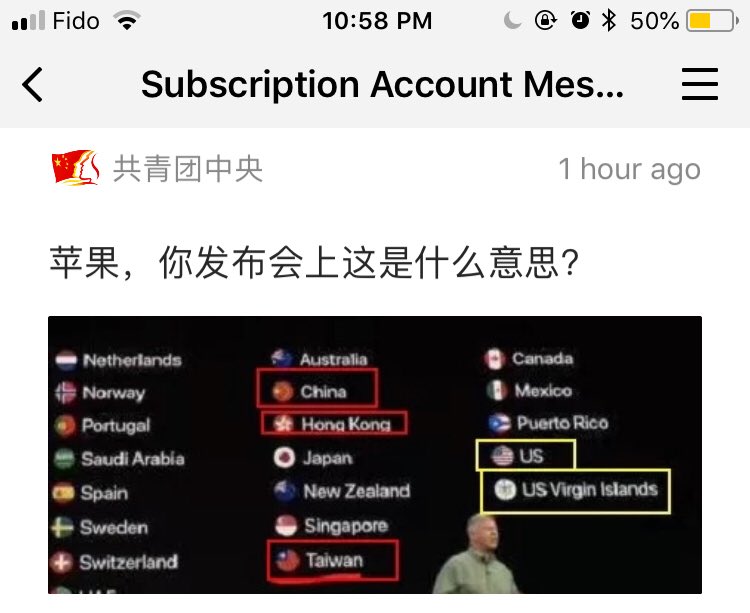 The ability to persistently link people’s identities and activities is a core theme of China’s raft of developing surveillance and population management schemes. It has arisen in the nascent social credit system, in DNA collection, in facial and voice recognition systems, in real name registration requirements for online accounts and other services, and in a proliferation of ID checks for services such as sending packages and taking long-distance transportation. This week brought news of major steps—one actual, one prospective—by U.S. tech giants Apple and Google to better facilitate this capability.

On Wednesday, Apple announced a trio of new iPhones whose features include long-awaited support for dual SIM cards. In most countries, the new iPhones will accommodate one physical SIM card, and one virtual “eSIM.” Phones sold in China, though, will take two physical SIM cards, an exceptionally unusual bifurcation of the company’s flagship hardware line. The Wall Street Journal’s Yoko Kubota and Tripp Mickle report that identity tracking appears to have been a decisive factor, as physical SIM cards are subject to real name registration requirements that eSIMs might circumvent.

An acronym for subscriber identity module, SIMs are microchips that allow smartphone users to access a wireless network. With dual SIM, users can use two phone numbers on one device.

Outside of China, the new iPhones feature a technology that blends a physical SIM with an eSIM technology, a digital embedded SIM that lets wireless subscribers store a second phone number on the device without a second physical SIM card.

But in China, that is a challenge because of regulations that require carriers and regulators to be able to track the device user’s identity. That would be difficult to do with eSIM, which would be embedded by Apple and not the carriers.

The WSJ reported last year that cellular connectivity for Apple Watches had been “abruptly cut off for new subscribers, without explanation,” citing similar suspicion that “the suspension likely stemmed from Chinese government security concerns related to tracking users of the device.” An analyst told the paper that “the eSIM [system] isn’t mature enough yet in China,” and “the government still needs to figure out how they can control the eSIM.” Apple now lists Apple Watch LTE connectivity as available in only seven cities, excluding Beijing, on China Unicom, and as “Coming 2018” on China Mobile and China Telecom. Its website warns that service availability “could be delayed or suspended” by the carriers.

Some analysts have pointed to the lack of eSIM support agreements with Chinese carriers to explain the hardware fork. This situation is far from unique, however: Apple lists only ten countries where eSIM support will initially be available, even there only from selected carriers. Carrier agreements do not therefore seem sufficient explanation for the unique arrangements Apple has made for China.

On Friday, meanwhile, The Intercept’s Ryan Gallagher reported new details of Google’s “Project Dragonfly,” a search engine it had been developing that could accommodate requirements from Chinese authorities and enable the company’s return to the Chinese market. The company’s apparent willingness to comply with censorship, as well as its refusal to clarify its intentions, have sparked widespread concern in the weeks since Gallagher first revealed them. The latest revelations highlight surveillance concerns, with news that Google planned to link search queries to users’ phone numbers, making them more easily traceable and personally identifiable. Searching for politically sensitive terms might therefore be not only fruitless, but actively dangerous.

Leading human rights groups have criticized Dragonfly, saying that it could result in the company “directly contributing to, or [becoming] complicit in, human rights violations.” A central concern expressed by the groups is that, beyond the censorship, user data stored by Google on the Chinese mainland could be accessible to Chinese authorities, who routinely target political activists and journalists.

Sources familiar with the project said that prototypes of the search engine linked the search app on a user’s Android smartphone with their phone number. This means individual people’s searches could be easily tracked – and any user seeking out information banned by the government could potentially be at risk of interrogation or detention if security agencies were to obtain the search records from Google.

“This is very problematic from a privacy point of view, because it would allow far more detailed tracking and profiling of people’s behavior,” said Cynthia Wong, senior internet researcher with Human Rights Watch. “Linking searches to a phone number would make it much harder for people to avoid the kind of overreaching government surveillance that is pervasive in China.”

The search engine would be operated as part of a “joint venture” partnership with a company based in mainland China, according to sources familiar with the project. People working for the joint venture would have the capability to update the search term blacklists, the sources said, raising new questions about whether Google executives in the U.S. would be able to maintain effective control and oversight over the censorship. [Source]

The news indicates that Google would re-enter China without one of the core principles to which it adhered last time around: what company biographer Steven Levy described in his book “In The Plex” as “a firm policy against storing personal data inside China—to avoid the problems of having the government demand that Google turn over the data” as Yahoo! had infamously been compelled to do for the prosecution of journalist Shi Tao. Many such precautions would now be illegal in any case under new rules like those in the 2017 Cybersecurity Law, which compelled Apple and others to move Chinese users’ cloud data to Chinese data centers earlier this year.

They are required to report illegal content they find during the provision of search services. https://t.co/F6fxR2rlKO and there are real name registration systems required for all internet access. https://t.co/8v0DIGp1LM

Before these latest revelations, Suzanne Nossel of the Pen American Center highlighted risks to Chinese users in an extensive article at Foreign Policy warning of the implications of Google’s acquiescence. The article draws on “Forbidden Feeds,” the organization’s March report on social media control in China. Though its focus is on social media platforms, its warnings are also relevant to traceable searches like those planned under Dragonfly.

For media companies, there is no wiggling free from government dictates. “China’s legal system conscripts domestic social media companies to be active participants in the monitoring and censorship of their own users. Chinese companies have no choice but to operate in accordance with the government’s demands. … Within the existing censorship framework, there is simply no way for foreign social media companies to operate in China without becoming active partners in the government’s efforts to silence dissent through censorship, mass surveillance, and the use of criminal charges,” the report adds.

[…] For ordinary users who take advantage of Google’s services, the government’s right to access personal data—such as search histories—housed on corporate servers would be absolute. An appendix to the PEN America report documents the cases of 80 Chinese citizens who have been targeted, detained, or prosecuted for online postings. The list includes people such as the writer Wu Yangwei, who was detained and strip-searched after broadcasting a press freedom protest online; the women’s rights activist Su Changlan, who was convicted of “subversion” for posting articles and comments supportive of Hong Kong’s Umbrella protests; and the blogger Duan Xiaowen, who has been imprisoned and tortured for blogging about government corruption. Another prominent example of an online dissident was 2010 Nobel Peace Prize winner Liu Xiaobo, who died of liver cancer last year while serving an 11-year prison sentence in part for his role in drafting the online “Charter 08” petition on freedom and democracy. The prospect of Google helping to build cases against such courageous advocates is dire. [Source]

Earlier this week, Gallagher reported on one of several Google engineers who have resigned in protest at Project Dragonfly. In a letter to his employers, machine intelligence developer Jack Poulson wrote that “I view our intent to capitulate to censorship and surveillance demands in exchange for access to the Chinese market as a forfeiture of our values and governmental negotiating position across the globe.” Poulson later told Buzzfeed that “I’m offended that no weight has been given to the human rights community having a consensus. If you have coalition letter from 14 human rights organizations, and that can’t even make it into the discussions on the ethics behind a decision, I’d rather stand with the human rights organizations in this dispute.” Half a dozen other staff have reportedly left the company, while 1,700 have signed a letter demanding that ethical concerns be addressed.

The China controversy comes with Google under broader political and legal pressure at home in the U.S., and facing demands for global content takedowns from various other countries. Regarding the former, tech journalist Kara Swisher wrote in a New York Times op-ed on Thursday that “Washington politicians should take all their sanctimony and direct it at the China issue, which actually deserves some scrutiny.” Some have already done so: a cross-party group of 16 senators and representatives wrote to Google on Thursday, asking for clarity about its plans in China.

Apple’s Wednesday announcement, meanwhile, touched another political nerve. A slide used in the presentation listed the “markets”—not “countries”—where new products would be available at launch, and included Hong Kong and Taiwan separately from China. This prompted complaints echoing those aimed at several other foreign companies this year. On Weibo, the Communist Youth League posted a demand for explanation from Apple:

Official trolling is coming, thoughts and prayers for Apple. pic.twitter.com/6TbgpIJfUb

The added highlighting suggests an argument stated outright in a Global Times editorial: that if Apple uses the term “U.S. Virgin Islands,” it should also use language like “China’s Hong Kong” or “China’s Taiwan.” “U.S.” is an integral part of the territory’s formal name, however, necessary to distinguish it from the British Virgin Islands or those under Puerto Rican jurisdiction. Puerto Rico itself appeared on the Apple slide without explicit statement of its status as another U.S. territory, further undermining the claim of a double standard.