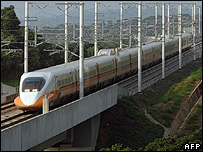 Taiwan’s new high speed train service – which begins commercial operations on Friday – is expected to herald the start of a transport revolution on the island.

Travelling on the sleek white and orange trains at speeds of up to 300km/h (186 mph) will see journey times between the capital, Taipei, in the north, and Kaohsiung, the island’s second largest city in the south, slashed from more than four hours to just 90 minutes.

“With the opening of the high speed rail, Taiwan island will become Taiwan city,” predicts Hank Huang, at the Taiwan Institute of Economic Research. [Full Text]

High-Speed Rail Network To Be Doubled