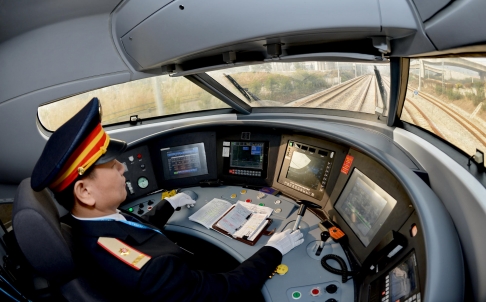 The opening of the Shenzhen-Xiamen and several other high-speed rail lines on Saturday brought the total length of China’s high-speed network to over 12,000 kilometers, less than seven years after it opened. The rail network as a whole now covers over 100,000 kilometers. From Xinhua:

It is the last link in the chain between the most dynamic cities and manufacturing centers in east and south China, with a population over 700 million, and almost as large as Europe.

[…] Other new high-speed rail lines which began services on Saturday include one in the northwestern province of Shaanxi, starting point of the ancient Silk Road, and another in south China’s Guangxi Zhuang Autonomous Region, the bridgehead of China-ASEAN cooperation.

[…] The first Chinese “Harmony” high-speed train pulled out of the station in April 2007. Six years and five months later, the world’s second largest economy has built the world’s biggest high-speed rail network. It was a short time and full of ups and downs. [Source]

See more on the new Shenzhen-Xiamen line from He Huifeng at South China Morning Post.

Though the high-speed network’s image suffered a heavy blow from the 2011 Wenzhou disaster, The New York Times’ Keith Bradsher wrote in September that it has since “without a doubt, transformed China, often in unexpected ways.” Nevertheless, Global Times’ Shan Renping—believed to be a pen name for editor-in-chief Hu Xijin—complained that the new lines’ opening had been overshadowed by negativity:

Public opinion in China is dominated by cynics and talkers, rather than pragmatic doers. If you follow debate on the Internet every day, you might believe China is filled with beaten petitioners, blackmailed “good Samaritans,” corrupt officials, and silly professors. News like the opening of five new rail lines within a single day are drowned in debate over all kinds of social controversies.

[…] The Internet greatly satisfies the public’s desire for negative and bizarre information. This explains why news portals are reluctant to highlight things like the new rail lines. But whenever an accident takes place on the railway, it will instantly make headlines online and stir up a carnival of criticism. This is the true ecology of Chinese public opinion at the moment. We have no choice but to get used to it. [Source]

“The Xiamen-Shenzhen high-speed rail line will likely suffer an annual loss of 2 billion yuan based on the newly announced ticket prices,” the source was quoted by 21st Century Business Herald newspaper as saying.

The total income for the Xiamen-Shenzhen railway line is predicted to be only around 600 million yuan in the first year during its initial operation period, which is still not enough for the railway corporation to pay back the banking loan interest, according to the source.

[…] But Zhao Jian, a professor at Beijing Jiaotong University, had a different view, saying that it is “almost impossible for the high-speed railway lines to reverse their situation of suffering losses due to huge costs, especially in China’s central and western regions, where the passenger flow is very small.”

“Finally, gaining fiscal support from the central government will be the only way for the railway corporation to repay their debts,” Zhao told the Global Times. [Source]

Meanwhile, work on a Beijing-Shenyang line is expected to start by mid year, Xinhua reports:

The 709-km railway will cut travel time between the two cities in half to 2.5 hours, said Tian Limin, a senior manager of the railway project at a conference organized by the Liaoning provincial government on Monday.

The railway is expected to be completed within 5 years with a total investment of 124.5 billion yuan ($20.4 billion). It is designed with a speed of 350 km per hour, said Tian. [Source]