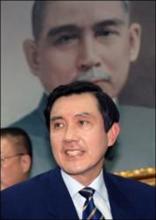 Taiwan’s major and the opposition party leader Ma Ying-jeou announced his resignation from the post of Kuomingtang’s chairman after local prosecutors indicted him on changes of corruption. But he also claimed that he will still run for president. Below are news about the resignation and the running for president.

Taiwan’s major and the opposition party leader Ma Ying-jeou declared to resign from the post of Kuomintang’s chairman at 6:00 p.m. Tuesday after local prosecutors indicted him on charges of corruption.

Ma Ying-jeou stepped down as Taiwan opposition leader after being indicted for embezzlement Tuesday but defiantly announced he was running for president in a day of high political drama.[Full Text]

The outcome of the investigation into Chinese Nationalist Party (KMT) Chairman Ma Ying-jeou’s alleged misuse of his special mayoral allowance and the possible consequences if he were to be indicted have been the subject of speculation in political circles in recent months.[Full Text]

Words of the Week: Truth of the Universe

What If Chiang Kai-shek Had Won?