One, Two Or Many Chinas? 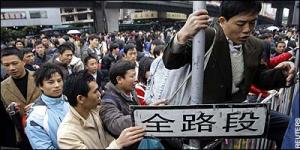 Prolific China scholar Jeffery Wasserstrom writes for OpenDemocracy on the dangers of thinking about China in monolithic terms:

China is continually part of the global news agenda, a tendency that is certain to accelerate in 2008 as its supercharged economy develops and as Beijing hosts the Olympic games on 8-24 August. This media coverage of China in the west is often dominated by emotionally charged stories, of which the reports of the film director Steven Spielberg’s about-face on 12 February – from considering playing an advisory role in planning the spectacles that will accompany the Olympics to criticising the Chinese Communist Party for its policy in Africa – is but one example. In such times, it is important if not always easy to avoid the tendency to oversimplify contemporary China. But how can outside observers escape this trap?

In the Chinese history courses I teach, one of my goals is simply to get students to think of the country as an incredibly diverse place – and realise that popular western images of “China” thus often only have relevance for particular social groups or particular regions. Despite all the shots they have seen of Chinese people dressed in widely divergent ways, old visions of a monolithic country where everyone wears “Mao suits” linger. And even when notions of uniformity fall, they’re sometimes replaced by new visions of China as divided neatly along a single axis.

Jeffrey N Wasserstrom is a professor of history at the University of California, Irvine.

Reflections on Ten Years of Covering China from Cyberspace

About the New Danwei

It’s Time to Retire the Tiger and the Dragon

Chinese Media in the U.S.

China’s Other Billion: Dispatches from a Rural Road Trip