Over the past two weeks, information and comments about the Weng’an riot have dominated Chinese chatrooms and blogosphere. The Xinhua news agency quickly put out its official version of the story, and while reporters from the official domestic media and foreign media are on-the-scene investigating the incident, they are not allowed to publish their reports or have not been given full access. Meanwhile, online censors have been deleting critical comments from netizens like crazy.

However, the more official spin that is put on this event, the less likely it is to be believed by angry netizens whose questions and comments are not allowed to be aired in Chinese chatrooms or even on their own blogs. Right after the “Tigergate” case finally concluded with online public opinion winning out over local officials’ self-protection efforts, and President Hu Jintao made a superficial but symbolic gesture to “listen” to online opinion, the Weng’an riot highlighted one of the most pervasive issues in Chinese society: the lack of trust and credibility in public agencies, and of judicial justice when helpless small people’s lives are arbitrarily abused by those with powerful connections.

Despite the censorship, in this case, netizens have won the battle for public opinion. On July 3rd, the Guizhou government announced that several officials involved in the case have been sacked and the case has been reopened.

The following text and pictures are vivid examples that illustrate the battle between netizens and government censors over the Weng’an event. The first one is an angry essay calling for an “Online Uprising” against state censorship. Its content has been spread to more than 4290 sites in Chinese cyberspace, and there is little doubt that a far greater number of digital copies has been transmitted through email, QQ, MSN or Skype. Despite the fact that most online postings of the essay were quickly removed by censors, the speed with which it spread shows how powerfully this sentiment resonates with netizens.

《For the Sake of Human Dignity, Let’s Rise Up On the Internet!》（reposting）

The people who primarily started the Weng’an riots are a group of high school students. When I saw this report, I could not help my tears. What kind of fate makes a group of teenage students “rioters”? What made them leave their desks, and become angry youth who went out to buy gasoline and set a fire?

In a society which lacks human rights and the rule of law, no one is secure. The unfortunate fate of this young girl today could happen to your relatives tomorrow.

In this world some criminals are more secure than others. They are not those who committed crimes because they are so poor and have no way to make a living. On the contrary, they do whatever they please with no concern for the consequences of their actions because of their family’s social status. There is power behind them. Ordinary citizens have absolutely no rights when facing such power.

Why did tens of thousands of “rioters” in Weng’an all believe that this is a murder case and the criminals are protected by the government? Why is the government so discredited in their eyes? Why do they hate the police so much? Is it really true that this is just because they are so stupid and have been “fooled” by an “extremely small minority of people” ? Did they learn from school that they should not believe the government? Did they learn from their parents that they should buy gasoline to burn police vehicles?

Why are netizens so one-sided in their support for those “rioters” in the Weng’an incident? Why do all netizens believe “the handful who has ulterior motives” but do not believe the government?

Why does the government block the information? Why do censors delete our comments like crazy? Why do CCTV and Xinhua dare not report the real reason why people are so angry? Why can’t we see what the victim’s family is saying on CCTV?

The Internet belongs to we, the netizens. Websites are the property of website owners. Every single post online is the intellectual property of individual netizens. Website owners paid for their domain names and storage space, and worked so hard with netizens to build online communities. They did not use the government’s funds; the government does not own any stock in those websites. On what basis can the government tell website owners what to publish and what not to publish on their own property? You already control almost all broadcast and print media, you have made these media as your mouthpiece, with taxpayers’ money, and you still cannot leave our only online space alone?

What do the people get when they lose their freedom of speech?
No one knows about their pain. Because of the information blockage, they lose their right to seek support from society.

Their pain, their resentment, their anger are buried underneath, like those dead bodies buried underneath the ruins of the earthquake. It has been Gao Yingying 高莺莺, Dai Haijing 戴海静, Liao Mengjun 廖梦君, Li Shufen 李树芬. Someday will it be you and me?

What are the consequences when people are deprived of freedom of information?

Because they do not know the truth, they cannot make better decisions for themselves. They can be manipulated by others to become their instrument or weapon, because they were just selectively given information. Their anger and sense of justice are being misguided to attack those who should be their allies. A person who lives under such conditions is like a robot, and the remote control is in the hand of the propaganda agencies.

If what we are allowed to say disgraces our dignity and harms our interests; if what we hear everyday is for the purpose of deceiving and manipulating us; if the education we receive everyday is an insult to our intelligence, my friends, do you want to tolerate such a life?

Who forced us to accept such regulations as “Do not publish…..” when we register our websites? How many people among 1.3 billion Chinese gave them the power to do so? Has any survey been done? Any public hearing on this matter? Who demands that private websites have to have personnel deleting contents at all times? Do online editors and website owners get their salary from propaganda departments?

I have had my online name blocked and my posts deleted many times. I had the experience that thousands of my posts disappeared in a second. But I have never hated website owners. I know they are under pressure. They do not do that willingly.

I hope that this Weng’an riot can inspire some website owners courage to rise up. They can rebel against the directives of “relevant agencies” and refuse to delete those posts. In fact some websites are doing just that.

We want to have dignity as human beings.

For the sake of human dignity, let’s rise up online!

Rising up online is not illegal. According to the Chinese Constitution, citizens have the right to freedom of expression. According to the Property Law, servers and websites are private property, and must not be arbitrarily invaded. If the Internet police believe some posts are illegal, they can indict the author and the court can make a judgment, authors should be responsible for what they write.

But in our opinion, Internet police have no right to delete our speech. Whether this speech violates the law or not has to be decided by a court. Who gave the right to the Internet police to decide? Evidence shows, the speech deleted by Internet police is not illegal speech. The brutal way that Internet police censor speech is a violation of the Chinese Constitution.

Do Chinese people belong to a lower class of human beings? As the largest population in the world, 1.3 billion people do not deserve the basic freedom of speech? In today’s India, those who were “untouchables” for thousands of years now have more freedom of speech and freedom of information than Chinese intellectual elites.

Any attacks on Chinese I have to bear to listen to, because we are such a “low class” people.

The second photo series was published on a blog titled “Patriotic Youth Respectfully Call Me ‘Traitor.'” The author posted a series of photos with captions to expose what happened at the Guizhou government official press conference on July 1st, translated by CDT. 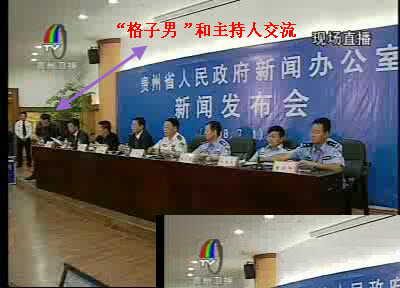 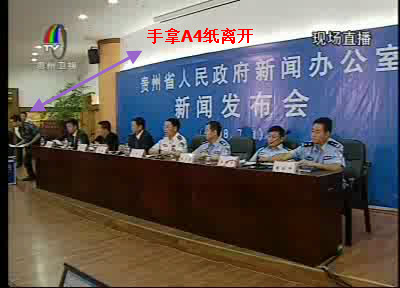 Leaves carrying a sheet of A4 paper. 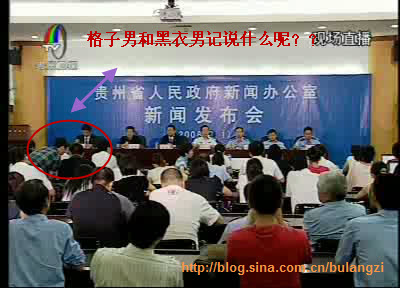 What are Checkered Shirt Man and Black Shirt Reporter talking about? 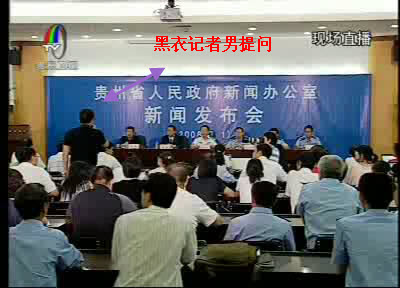 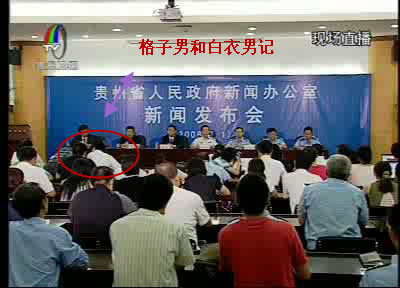 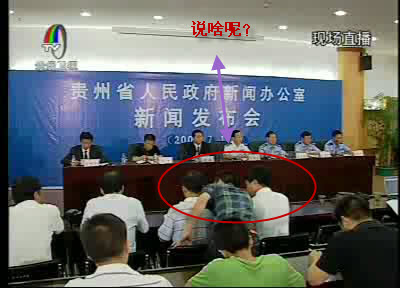 What is he saying? 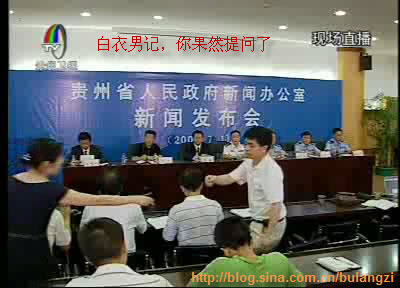 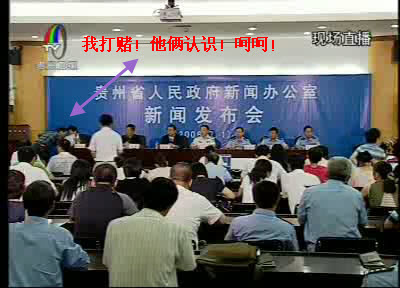 Placing a bet here: The two of them know each other. 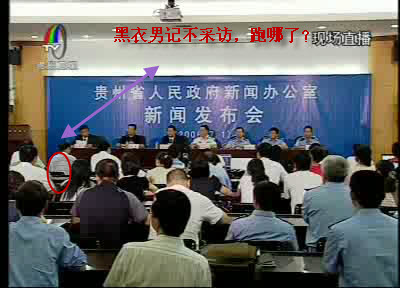 Black Shirt Reporter is gone. Where did he run off to? 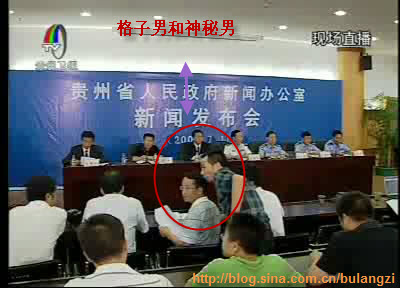 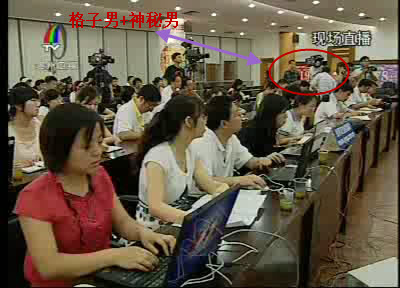 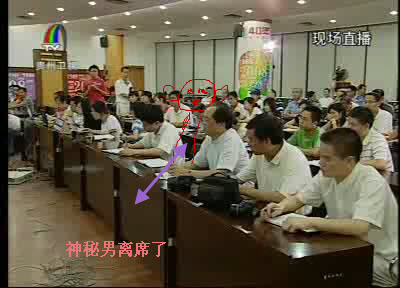 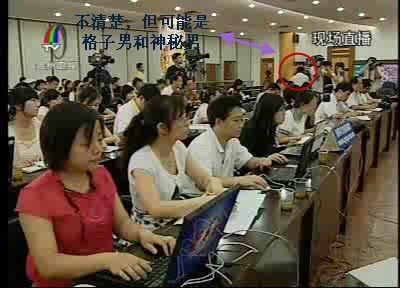 Not clear, but it looks like Checkered Shirt Man and Mystery Man. 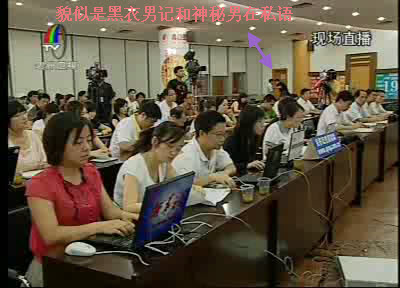 Seems like Black Shirt Journalist and Mystery Man are whispering about something. 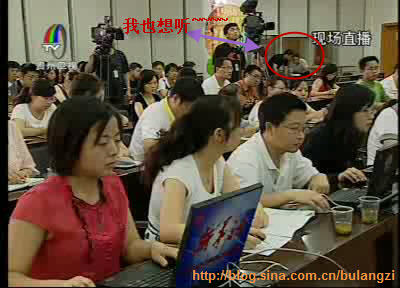 I want to hear this…

“A bunch of clowns, a sorry performance.”

“They don’t know how to use SMS? Email would work, too.”

“This kills me. These people make all Chinese people lose face.”

“This trash, they insult our intelligence. I wonder what foreigners would say if they witnessed this. So this is one of the ways in which our human rights are better than America’s? “

The third collection of photos of “push-ups” is a satirical response to the official version of what happened. On July 1st, Guizhou government issued an official report to describe the circumstances under which Li Shufen allegedly committed suicide. According to Hong Kong-based Asia Weekly magazine, the report said, “Liu [a man who was accompanying Li Shufen at the time of her death]…started doing push-ups on the bridge. After his third push-up, he heard Li Shufen shout, ‘I’m leaving.’ Then she jumped into the river.” No other evidence for her suicide was provided, and Li’s family was not at the government press conference to offer their version of the story. Subsequently, the idea of “doing push-ups on the bridge at midnight” has become a hot topic for satire online, to the point that some smart users immediately registered “三个俯卧撑.com” (threepushup.com) as a domain name, expecting it will attract huge traffic to sell ads. The following photo captions say: “Everybody doing push-ups“.

UPDATE: three days after these satirical comments showed up online, “push up” became the latest censored word in Chinese online forums. But it surely did not stop bloggers continue to talk about it in more creative fashion.

For more details of the “push-up” story, please read Bob Chen’s Let’s do push-up! on the Global Voices.