Chinese Democracy is the sixth studio album by American rock band Guns N’ Roses. It was released on November 23, 2008, worldwide and in the United Kingdom on November 24, 2008. CDT had a previous post on this story here.

Here is a review in Rolling Stone magazine:

Let’s get right to it: The first Guns n’ Roses album of new, original songs since the first Bush administration is a great, audacious, unhinged and uncompromising hard-rock record. In other words, it sounds a lot like the Guns n’ Roses you know. At times, it’s the clenched-fist five that made 1987’s perfect storm, Appetite for Destruction; more often, it’s the one sprawled across the maxed-out CDs of 1991’s Use Your Illusion I and II, but here compressed into a convulsive single disc of supershred guitars, orchestral fanfares, hip-hop electronics, metallic tabernacle choirs and Axl Rose’s still-virile, rusted-siren singing.

If Rose ever had a moment’s doubt or repentance over what Chinese Democracy has cost him in time (13 years), money (14 studios are listed in the credits) and body count — including the exit of every other founding member of the band — he left no room for it in these 14 songs. “I bet you think I’m doin’ this all for my health,” Rose cracks through the saturation-bombing guitars in “I.R.S.,” one of several glancing references on the album to what he knows a lot of people think of him: that Rose, now 46, has spent the last third of his life running off the rails, in half-light. But when he snaps, “All things are possible/I am unstoppable,” in the thumper “Scraped,” that’s not loony hubris — just a good old rock & roll “fuck you,” the kind that made him and the old band hot and famous in the first place.

On the official Chinese media, this new album is also being mentioned. The following article is from Beijing-based Global Times, translated by the Foreign Expert blog:

On the 23rd, American rock band “Guns and Roses” plans to release what should be the band’s first new album in 17 years; this album, called “Chinese Style Democracy,” turns its spear point at China, immediately becoming the object of much Western media publicity. This also aroused much of the Chinese population’s and fan’s indignation. Some Internet users say that those Western stars who are entwined in scandles involving violence, sex, and drugs rarely come to China; moreover they are unable to talk about how to understand Chinese democracy, so their shows like this can only demonstrate that some Westerners say “democracy” but it is only their attempt to control and impress upon the pawns of the world.

An article from “The Wall Street Journal” online edition on November 22 said, this new “Guns N’ Roses” album has run into China’s wall, its title greatly offended the Chinese government, and also made many Chinese music fans angry. Reportedly, many Chinese people hope to have a larger voice, but many people think too much democracy, too quickly, will create chaos, and are unhappy about foreign influences coming in and getting mixed up. A Chinese singer said, from the album’s title it can be seen that “they do not understand China,” it’s nothing more than for the sake of stirring up a large group of people’s excitement.

Here are the lyrics from GUNS N’ ROSES:

You think you got it all locked up inside
And if you beat them all up they’ll die
Then you’ll walk them home for the cells
Then now you’ll dig for your road back to hell
And with your ? makes you stop
As if your eyes were their eyes you can tell
In your lack of time

Question: An American rock band releases a new album called “Chinese Democracy,” what is the Chinese government response to this event?

Qin Gang：According to my understanding, many people do not like such music, because it is too noisy. I believe you should be a mature adult, aren’t you? 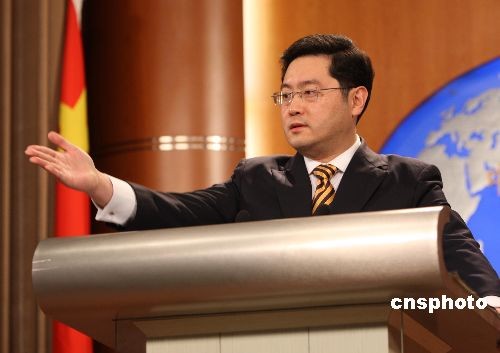 And, the following music video has been posted on many Chinese blogs, this one with the title “Be an immature adult”