Sun Liping (孙立平): The Biggest Threat to China is not Social Turmoil but Social Decay (Part I) 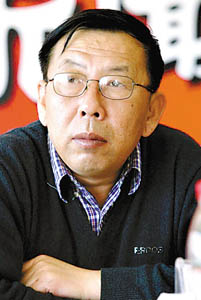 Sun Liping (孙立平) is a professor of the Sociology Department of Tsinghua University. He was also the PhD surperviser of Xi Jinping, the current vice-president of the People’s Republic of China. Professor Sun’s main research area is modernization and transitional sociology. He wrote the following post on his sociology blog on Feb. 28. It is being widely read in the Chinese blogosphere, and has appeared in major news websites such as Netease and the Southern Net.

The entire post has been translated by CDT’s Linjun Fan. Here is the first section:

This is a post for discussion. My main thesis is that the largest threat to China is not social turmoil, but social decay. This idea is very preliminary, so this post is a work in progress. I welcome interested friends to participate in a constructive discussion.

1. Are we worried about the wrong issues? Many people are now concerned about social conflicts, confrontations, mass incidents, etc. The reason why there is such a concern is fear of major social turmoil. However, I think the biggest threat to Chinese society may not be social turmoil, but social decay.

2. Social turmoil means serious social conflicts that threaten the basic framework of the political system, whereas social decay refers to the necrosis of the cells that compose the body of a society. To illustrate the point with a medical metaphor, turmoil is to a society what an injury is to a healthy body, whereas social decay is like the failure (or death) of the cells and living issue of the body. Perhaps the concept of “social erosion” by Mr. Fei Xiaotong and “political decline” by Samuel Huntington could help us understand the phenomenon better, although they are somewhat different from the “social decay” concept I talk about here. “Political decline” is closer to my concept .

3. The opposite of social turmoil is social stability. The opposite of social decay is social health. The two things need to be differentiated, although they are related. The problem is that misjudgment of the former could pose an obstacle for the timely treatment of the latter. I’d like to illustrate this point with another medical metaphor. A patient suffered from cancer and needed surgery. However, his doctor decided that he could not operate because the patient had heart disease. Actually this person didn’t have heart disease, or only to a very light degree. Thus the misdiagnosis of the heart disease caused the doctor to delay treatment of the patient’s real problem. Similarly, necessary treatment on social decay is often postponed because of fear that it would threaten social stability. Thus the problem of social decay becomes increasingly severe.

4. I have been stressing in my recent articles that the possibility for China to have large-scale social turmoil is low, although there are numerous social conflicts, some of which are growing in intensity. I wrote articles on this point about 10 years ago, and discussed it in an interview with Southern Weekend early last year. We overstated the problem of social instability and crisis in the past ten years or so, and formed a mentality that values stability more than anything else. In such a mindset, stability becomes the ultimate goal. Everything else must give way to it. Thus we failed to do many things we needed to do. Actually, it is hard to keep everything at peace in such a large country. With 1.3 billion population, it’s unavoidable that the country will have this or that disaster or problem. You could easily find unstable elements if you look for them. What’s more, the runaway power (of government officials) causes problems continually. For instance, the so-called mass incident in Dejiang County of Guizhou province was caused recently after local officials outrageously stopped some public entertainment activities. What matters is how we look at these problems. You could find unstable elements in any country in the world, if you look for it all the time. However, only in China do we have the slogan that “stability is more important than anything else,” and have such organizations like “Stability Safeguarding Committee.”

5. The phenomenon of social decay has become increasingly obvious in recent years. A major symptom of it is uncontrollable power. Although we have established the framework of a market economy through the past three decades’ reform, power is still the nexus of our society. Thus the foremost symptom of social decay is uncontrollable power. Corruption is just its outward manifestation. When I say that the power of the government is out of control, I mean that it has become a force that is not restrained either externally or internally. In the past, internal restraining of power was relatively effective, although there was no external control. The central government’s authority has been impaired. There has been a saying that policy initiatives could not go beyond the walls of Zhongnanhai [where the Central Government Offices are located] since a few years ago. The power of local governments and various departments are neither bound by forces from above nor below. There is no check or balance. It means that the power of the national government has been fragmented. Officials do not fulfill their responsibilities. They sacrifice the interest of the government, not to mention the whole society, for their own interest of preserving their position or getting promoted. Corruption has become out of control and is an untreatable problem against this backdrop.

6. This decay has spread to all aspects of social life. Various underlying rules prevail in the society, and have become the governing force of officials and ordinary citizens’ behavior. Mr. Wu Si has some very good analysis of this problem: The society has lost its morals; there is no bottom line of social ethics; strong interest groups are unscrupulous, which cause serious erosion of people’s sense of fairness and justice. Violation of professional conduct and professional ethics is widespread. The information systems throughout the society have become highly distorted. Falsification of statistical data signifies an institutional distortion of reality. As a saying goes, “officials in the villages cheat those in the townships; township officials cheat those in the counties; and false information goes all the way to the State Council.” This is a reality that is perhaps more truthful than official statistics.

Word of the Week: Stable Bottom