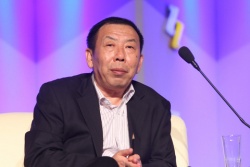 Sun Liping is a prominent sociologist who has studied the rural poor, inequality, and the social transformations brought by the transition to a market economy. Sun argues that “social decay,” such as rent-seeking by government officials, poses a far greater threat to the Chinese party-state than social instability.

Born in Liaoning Province in 1955, Sun was in the first cohort of students to attend university after the Cultural Revolution. He studied journalism at Peking University (PKU), then sociology at Nankai University. Sun taught at PKU from 1983 to 1999, then moved to Tsinghua University in 2000, where he is currently on faculty.

Between 2009 and 2012, sources such as CDT, The Guardian, and the Telegraph, stated that Sun was Xi Jinping’s doctoral advisor at PKU. However, in 2013, Sun explained in a blog post that he was not Xi’s advisor, but rather was on the committee that reviewed all PhD dissertations at PKU.

Sun studies how China’s political and economic trends have impacted social life. In the 1990s he collected the oral histories of rural dwellers in order to understand the “communist logic of practice” in their daily lives and how this logic was transformed by Reform and Opening.

Sun has openly criticized former President Hu Jintao and the “ascendance of the stability preservation regime” that began in the run-up to the 2008 Beijing Olympics. Sun argues that China’s vested interests enrich themselves by maintaining the status quo. In the Tsinghua sociology department’s 2011 annual report on social progress, Sun warned that this “transition trap” was stalling reforms. The report was removed from Chinese websites within days of its release.

While Sun has published fewer academic and opinion pieces in the past few years, he continues to share his views on the current state of Chinese society and the possible directions of its future. In December 2016, Sun wrote that more immediate, tangible issues must be addressed before reform can take place:

What does this mean? It means there are things that come before reform. If these things aren’t resolved, then we can’t start to talk about reform. For example, in the 1980s, China was able to launch reforms because a liberation of thought took place at the same time. Without that liberation of thought, we wouldn’t have had the following 30 years of reform. Now we are facing the same sort of problems. If we do not solve those realest, most apparent, most pressing issues, then we have no way to talk about reform. [Chinese]

In April 2017, Sun opened a WeChat public account to continue sharing his “fragments of thought” that “rush forth from time to time.”