The Dow Jones Newswires reports that China was successful at the recent G-20 conference in the UK: 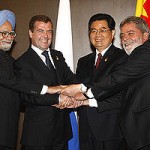 “There are some huge wins for China in this agreement,” Standard Chartered Bank economist Stephen Green said after the summit ended. “Now, more than ever, wins for the global economy are wins for China, and their mutual dependence has never been clearer.”

Besides the push to improve financial regulation and accelerate IMF governance reforms, the G20’s plan to inject more than $1 trillion into the world economy through the IMF and trade finance programs will probably help stabilize demand for Chinese exports, said Green.

See also past CDT posts on the G-2o summit.

Japan and the U.S. Stay Out of AIIB; Taiwan Wants In