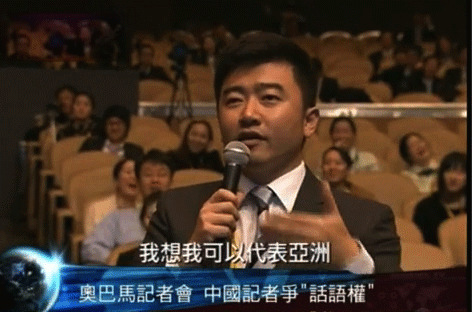 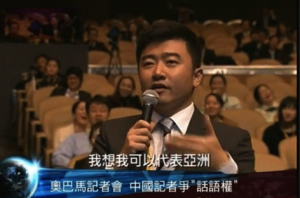 “I think I can represent Asia.”

Nickname for Rui Chenggang, former CCTV anchor, because of a controversial comment he made at the 2010 G20 summit.

Rui is infamous for his staunch nationalism. At a press conference during the 2010 G20 summit in South Korea, Barack Obama invited the Korean press to ask him a final question. Instead, Rui Chenggang raised his hand. “I hate to disappoint you President Obama,” he began. “I’m actually Chinese, but I think I get to represent the entire Asia. We’re one family here in this part of the world.”

Rui set the Chinese blogosphere abuzz. Some saw in his comments China’s increasing regional assertiveness, while others heard another example of how the Chinese government presumes to represent the Chinese people without their consent.

In July 2014, Rui was detained along with several other staff at CCTV’s financial channel on suspicion of graft. The sweep was so sudden that his desk was left vacant during the day’s edition of his show. His case remained silent until April 2016, when the China Business Journal reported that Rui will soon stand trial. No further developments have been reported since.

Wojiaoqianbuduoxiansheng (@我叫钱不多先生): When I met Rui Chenggang that year, I told him, “Give me an English signature!” He replied, “I only have a Chinese name!” Is Representative Rui is still alive these days? (July 18, 2016)