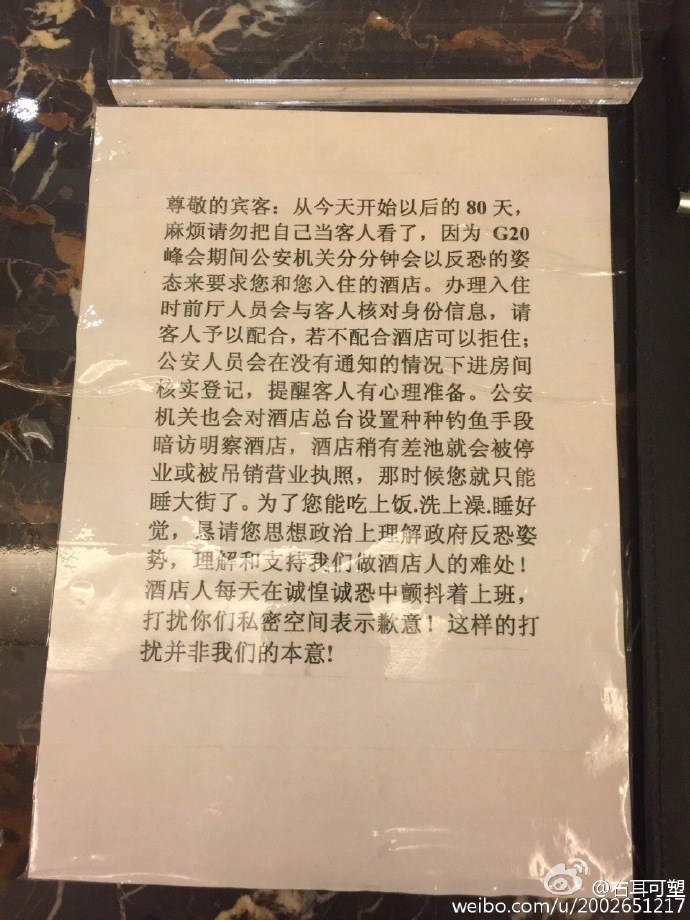 Hangzhou is already deep into preparations for the G20 Summit in September, the first to be hosted in China. A dilapidated historic house has gotten a fresh coat of paint (though probably nothing else), and residents have gotten English crash course manuals with 100 useful phrases, including “Hangzhou, a paradise on earth [sic]” and “Orioles Singing in the Willows.” Security has been stepped up in and around town as well. On Weibo user posted a photo of an unusual request of guests at hotel in Shaoxing, Zhejiang Province, just outside of Hangzhou:

You’erkesu (@右耳可塑): Zhejiang is hustling for the G20, too… I checked into a hotel in Keqiao District, Shaoxing… this notice at the reception made me laugh so hard my poop came out… so crazy… please make sure to read the second photo all the way through… 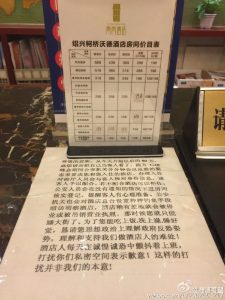 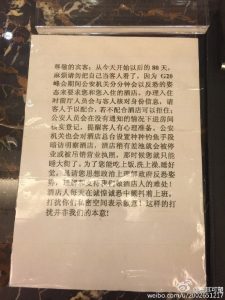 For the next 80 days, please do not consider yourself a guest here. As this is the G20 Summit period, public security officials are maintaining an anti-terrorism posture and will make demands of you and of the hotel in which you reside at all times. When checking in, front desk staff will verify your identity. We ask that guests please cooperate. If not, the hotel may refuse check-in. Security officials will enter rooms without prior notice to check guest registration. We ask guests to please be mentally prepared. Public security authorities will also set up lures to thoroughly investigate the on-goings of this hotel. If the hotel makes the slightest mistake, we will be shut down or our business license will be revoked, and then you’d have no recourse but to sleep on the street. To ensure you are able to eat, bathe and rest well, we earnestly request that guests politically and ideologically understand the government’s anti-terrorism posture. Understand and support us, the hotel team, in this tough situation! We work everyday shaking in abject terror. We apologize for this intrusion into your private space! We never intended such trouble!

Local netizens responded to You’erkesu with their own personal experiences of the pre-G20 clampdown:

Weitifeite (@微提斐特): They’re inspecting household by household here. They’re even noting the number of gas tanks and their serial numbers in everyone’s homes, because some peasant homes still use gas tanks. They’ve even opened all the sewage covers (maybe they’re not water drains) in Longjing Village. And there’s some more that I don’t dare mention…

Gaoqiaotian (@高桥恬): That’s not an exaggeration at all. Anyone who is not a Hangzhou resident has to get a residence permit. In the past, they introduced a policy to eliminate the need for a temporary permit. But now, to get around that, they are requiring people to get residence permits. Also for G20, all of the roads in downtown Hangzhou are being renovated. Facades are being put up on the roads and along the streets. But starting in June, all the big construction companies had to cease operations. When the G20 officially starts, businesses will go on vacation for about a week.

The World War II reference above comes from blogger and commentator Wuyue Sanren.

In April, China asked G20 participant countries for lists of “possible terror groups and terrorists who might target the meeting.” For its part, Beijing has voiced concern about the East Turkestan Islamic Movement, a Uyghur separatist group the government blamed for an SUV crash in Tiananmen Square three years ago. That particular claim was not conclusive, while China’s framing of ETIM as a significant threat is challenged by foreign experts, many of whom question whether it exists as a cohesive group.

The capital is more accustomed to having life put on hold for grand affairs of state. In the run-up to last September’s military parade commemorating the 70th anniversary of the end of World War II, concerts by Ladysmith Black Mambazo and the BBC Symphony Orchestra at the National Center for the Performing Arts were cancelled, while hotels near the parade site suspended booking around the time of the parade. Before the 18th Party Congress in 2012, government-owned hotels were instructed to report all guests holding journalist visas, .