Inspired by the revision of 44 Chinese characters proposed by China’s Ministry of Education, many Chinese netizens continue to create more characters as a form of online entertainment and political expression.  According to prominent blogger Hecaitou (和菜头), on August 31, netizens created three new Chinese characters together with other digital artwork within twelve hours. CDT translates some of them:

Adjective, Pronouced “nan“. This character is a combination of the characters for 脑残 (“naocan” brain damage).

Naocan is online lingo, used to describe someone who is not capable of thinking straight; often those whose thinking is crippled by party ideology.

Noun，pronounced “wao.”  It is the combination of 五毛 (“wumao” fifty cents) Fifty cent party is another common online lingo for government-trained and paid “commentators” who do not reveal their real identity and pretend to be ordinary netizens to spin government messages. 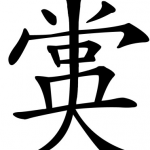 Noun, adjective and exclamation,  pronounced “diang”  It is a combination of 党中央 (“dangzhongyang” – CCP Central Committee). Blogger hecaitou, author of the hugely popular “Diary of the Digital Ocean (比特海日志)”, interprets the character as “the ultimate, sacred, absolutely correct, cannot be questioned; you get the shit beaten out of you but cannot say a word.” “意思是至高无上的，神圣的，绝对正确的，不容质疑的，抽你丫没商量的。”

This art work is entitled “LOST.”  Hecaitou describes it as: “Used for identification purposes among the Chinese who are traveling overseas.  Those who saw this picture and laughed hard at first, then shed tears silently, can be identified as mainland Chinese.” (“它用于在海外旅行的华人之间相互辨别身份。凡是看到这张图片先是哈哈大笑，然后黯然落泪的，可以判断为大陆同胞。”) [The fonts used are compiled from the logos of popular web services blocked by the Great Firewall]

Update: for example, one can say: “Diang, man! These nan waos must be working overtime.” (from Amy K. Bell’s blog)