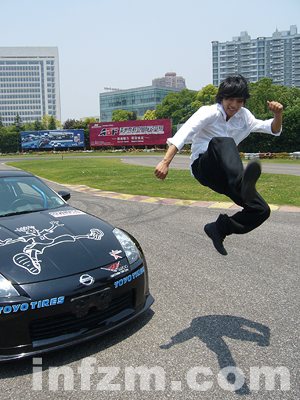 Han Han was named as the ‘Person of the Year” in 2009 by two influential publications: Guangzhou-based newspaper Southern Weekend（南方周末） and Hong Kong-based magazine Asia Weekly (亚洲周刊). Here are some excerpts of the relevant articles in both publications, translated by CDT:

Han Han is a 27-year-old author and race car driver, and his blog has generated nearly 300 million visits since 2006. He follows and is concerned with public rights defending events. On the Shanghai “Fishing” incident, Hangzhou “70 yards” incident, forced eviction incident and other events his clear and powerful writing has generated an enormous influence on public opinion. As a member of the post-80s generation, he lives authentically and freely, and demonstrates the energy of China’s youthful citizens and the hope of civil society in China.

From Southern Weekend: The Name of Han Han Means to Offend [the Establishment]

In the public eyes for ten years, he is now a household name, and still young, he is called by his supporters “Young Master Han.” This nickname is flattering and lighthearted, saying that he has style and quality, and is not a boring person. Young Master Han is an author, the only National Champion of in both field and rally car race, is an idol, and owns a blog which has the highest traffic in the world. He is so famous, that people often forget how extraordinary it is that one person has all these different titles. But Young Master Han became the Han Han that is now widely respected after he started a blog, and began writing social commentary which resonates with our time. His self-styled commentaries caused controversy, but were also widely popular. One day, even the most conservative people started to realize that this young man was not full of nonsense. Behind the 300 million clicks on his blog posts was a fresh humanist radiating the wave of freedom.

The following profile is from Asia Weekly:

Han Han was born on September 23, 1982. He won the first class award in the first “New Concept” writing contest in 1999, and was held back in his first year in the Songjian Number 2 High School in Shanghai the same year. He dropped out of high school in 2000, and published his first novel “Three Gates.” This book has sold 2,030,000 copies since then. He moved to northern China for a while, published a collection of essays “1 Degree Below Zero” in 2001, and the novel “Flying as Youth”, and a self-selected collection “Poison” and “Poison 2” in 2002. In 2003, he published a collection “General Text 2003” and represented the Beijing Jisu Car Rally Team to attend the National Car Rally race. He published a novel “Turmoil of Chang’an” in 2004, and a collection of essays “Han Han in Five Years” in 2004. The French translation of “Han Han in Five Years” was a bestseller in France in October 2004. He also won the championship of the Asia BMW Qualification Race, together with a $50,000 BMW scholarship. In 2005, he published a collection of essays: “Flowing Around Just Like This.” In 2006, he published a novel “A City” and a CD “Eighteen Taboos.” He also started blogging in 2006, and since then his blog has had 300 million visits. In 2007, he published the novel “The Day of Honor” and won the National Field Car Rally and Group 1600 CC driver championship.

This is a poster for Han Han’s not-yet launched magazine: “Duchang Tuan” (独唱团) “Chorus of Solos.”

In Chinese, “defending the center” (挡中央) is a homonym for “The Central Committee of the Party.” （党中央）

A government censor asked Han Han whether this poster can be interpreted as meaning “the Central Committee has a gun”, Han Han responded: “I surely do not have such a colorful imagination.” 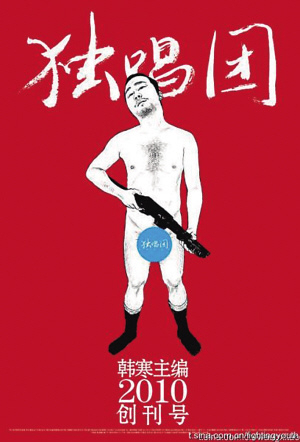 CDT will publish a translation of an interview with Han Han in a Chinese magazine shortly. Stay tuned.