“Tibetans And Han Are One Family”

This photograph (via CDT Chinese) was taken in 2010 in Kangding city, in the Ganzi/Kardze Tibetan Autonomous Prefecture of western Sichuan. The poster’s comment: “As I was out for a stroll, I happened to see a People’s Armed Police National Day patrol. Wow, that armoured car of theirs is impressive!“ 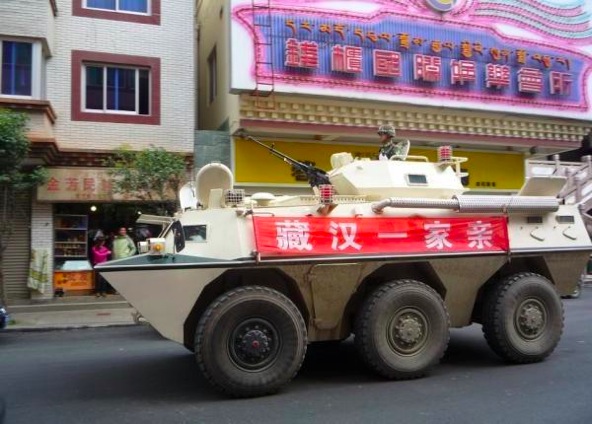 The banner reads “Tibetans and Han are One Family”. Shanghaiist’s Kenneth Tan points out a satirically photoshopped image of an identical vehicle outside Hong Kong’s Sogo department store in, supposedly, 2015, its banner reading “China and Hong Kong are One Family”.

If a declaration of fraternity hanging from the side of an armoured vehicle isn’t ironic enough, the blog Mountain Phoenix over Tibet notes (in a different context) the historical background of the name “Kangding” 康定. It replaced “Dajianlu” 打箭炉 (based on the Tibetan “Dartsedo”) in the early twentieth century, and is widely held to refer to the stabilisation or pacification of Kham (eastern Tibet).

A friend, who hails from Kardze town, tells me the name is a contraction of the Tibetan karpo (“white”) and dzebo (“graceful”) – actually a rather unlikely and funny name for a macho Khampa place. It sounds more like a name for a Tibetan cosmetics line: “Fair & Lovely”!

The town Kardze, however, is not the capital of the Prefecture Kardze. That privilege goes to Dartse(m)do, a formerly important trading-town on the old Sino-Tibetan border. But in present-day Tibet, folks who hail from Dartsedo would tell you they are from Kangding.

How Dartsedowas can be so brainless and voluntarily use that dreadful Chinese name is a mystery only they are able to penetrate. Doesn’t it mean “subjugation of Kham”? Arrog Khampa, what happened to your famous pride? Linguistics is a political battlefield, if you still haven’t noticed. Why do you shoot yourself in the foot?

The BBC’s Michael Bristow describes the extensive security operation currently in place in the area, following a series of self-immolations:

A BBC team was stopped and held at the roadblock [on the way to Kangding]. “Foreigners are not allowed into Tibetan areas,” said one security man.

We were then escorted back into Ya’an, where we were questioned at government offices by an official, surnamed Ma, who veered from friendly to threatening.

“You need to make a confession and sign a statement saying you will not go back into Tibetan areas,” he barked at one point ….

Robert Barnett, of New York’s Columbia University, said this region of western Sichuan, historically known to Tibetans as Kham, was relatively peaceful until a few years ago.

“We are talking about an area where China had a working relationship with Tibetans,” said Mr Barnett.

But he said trust started to disappear just over a decade ago when the central government began introducing hardline policies that were already in place in Tibet proper.

Kristin Jones at the Committee to Protect Journalists suggests that the policy of denying media access may be counterproductive:

Placing travel restrictions on journalists may have one unintended effect. It means that when it comes to unofficial news from China, activists and advocacy groups play a vital role in collecting and disseminating information.

Chinese authorities are hard on activists–even harder than they are on journalists. But by preventing reporters from doing their jobs, Chinese officials all but guarantee that activists are the ones reporting the news.