Weibo: No More “One Child, Or Else” 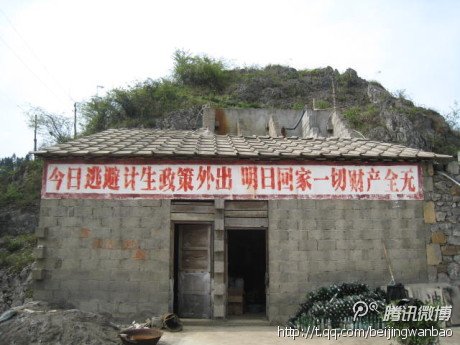 China’s Population and Family Planning Commission has announced an overhaul of threatening slogans used to enforce the one-child policy. On February 25, Beijing-based music critic Zhang Xiaozhou posted some of the more macabre slogans on his Weibo. (The post is also available on Twitter.) His post has been “retweeted” over 1200 times.

The Commission’s effort may be linked to a trend away from the infamous family planning policy towards encouraging two-child families, in light of the increasing economic and social strains of China’s aging population and gender imbalance.

China’s Family Planning Committee has announced its intention to clean up the following violent slogans: “If you should be sterilized but refuse, your house will be ruined;” “If we catch you we’ll sterilize you, if you run we’ll grab you. We’ll provide the rope for your hanging, and the poison for your drinking.”1 These are far from the most violent. Somewhere in Shandong: “To get your tubes tied is to honor your whole family.” In Chuxiong, Yunnan: “If one person has an excess birth, the whole village will undergo tubal ligation.” In Heze, Shandong: “Better that your family be ruined than lose the country.” In a county in Anhui: “It’s better to add ten burial plots than one person.” In Jiangsu: “It’s better to let the blood flow like a river than to have one excess birth.”

1 The implication: If your sterilization makes you want to kill yourself, we’ll provide the noose.