Bo Xilai: Down and Out?

With the public still digesting the Thursday dismissal of embattled Chongqing party chief Bo Xilai and the naming of his replacement, speculation turns to both Bo’s future and the broader political implications of his demise. Steve Tsang of the China Policy Institute writes for The Guardian that deliberations over Bo’s fate have only just begun:

But Hu and Wen cannot just sack Bo from all top offices. It would have implications for the balancing of different factions and vested interests in the party. Bringing Bo down has implications for those top leaders from privileged backgrounds like Bo, known popularly as the princelings, who enjoy support from former general secretary Jiang Zemin, head of the old “Shanghai faction”. The choice of another princeling, Zhang Dejiang, to replace Bo as party secretary in Chongqing is undoubtedly part of this balancing.

The future of Bo has not yet been decided, as the party leadership needs to do more horse-trading. It will probably be settled in the next few weeks. However, this will not be the end of the matter. What is involved here is much more than the fate of Bo. It is about the jockeying for position in the leadership succession schedule for the party congress in the autumn.

Until then, there will be plenty of manoeuvring by those holding top positions and those hoping to get a seat at the standing committee of the politburo. Bo’s standing committee dream is over, but how his fate will be decided will affect the prospect of others – and with it how China will be managed in the next decade.

The New Yorker’s Evan Osnos observes that the U.S. Republican Presidential primary race looks like a “group hug” in comparison to the dirty drama of Chinese politics, and The Economist adds that the Bo saga provides a rare glimpse beneath the publicly smooth facade of recent Chinese leadership transitions. The Financial Times’ Jamil Anderlini calls Bo’s sacking “probably the most important political event in China in more than two decades,” reports that most analysts believe Bo is “almost certainly being confined in some way to Beijing” to prevent he and his family from fleeing the country, and proposes several possible end-games for the former Politburo Standing Committee hopeful:

It is possible that Mr Bo will be given some minor official position so he can live out his days in comfort and relative obscurity but his boundless ambition and popularity among conservative intellectuals and officials means this is unlikely.

If Mr Bo is accused of relatively trivial charges, such as dereliction of duty for promoting Mr Wang, then he may still have a chance to agitate and rally support against his political enemies.

But if he is accused of very serious crimes such as corruption or political assassination then it could provoke a backlash among his powerful supporters and the general populace who have often welcomed his widely publicised political campaigns.

“President Hu [Jintao] and Premier Wen [Jiabao] have to think very carefully about their next move because whatever they do could potentially provoke a challenge to the entire political system,” Mr Li said.

Tsinghua University’s Patrick Chovanec, meanwhile, stresses that it’s important to step back from the immediate causes of yesterday’s news, including the drama surrounding the disappearance of former right hand man Wang Lijun, when tracing the roots of Bo’s downfall:

Bo’s real problem wasn’t liberal critics or sports cars or even turncoat lieutenants — although these became convenient nails in his coffin. Plenty of Chinese officials, snug in their patronage networks, have survived (or even shrugged off) far worse. The Party takes care of its own. But top Party leaders, regardless of political philosophy, had come to dislike Bo, not as a person per se — by all accounts, Bo is an extraordinarily charming man — but as a political persona, at least in his Chongqing incarnation, for three reasons:

First, they were offended by his courting of the media and his vigorous self-promotion, which showed a lack of appropriate deference and humility to established power channels and ways of resolving competition. Second, they felt threatened, because few of them were equipped to compete on this basis, if that’s what it took. Third, they were alarmed by Bo’s tactic of “mobilizing the masses” in ways that explicitly invoked the Cultural Revolution, which called up deep-seated fears that populist fervor could be used as a weapon against rival leaders within the Party — as indeed happened during the Cultural Revolution, to horrific results.

As for the fate of Bo’s polarizing “Chongqing Model” and his controversial “Red Culture” revival, Shanghaiist notes that Chongqing TV has already begun recruiting new staff for its advertising department. Bloomberg calls Bo’s removal, and Premier Wen Jiabao’s revealing press conference at the end of this week’s National People’s Congress, signals that Chinese leaders feared his aggresssive style. A separate Bloomberg piece points out that Bo’s firing may open up a slot on the Politburo Standing Committee for presumed rival and Guangdong party secretary Wang Yang, whose “Guangdong Model” of reform stood in stark contrast to Bo’s Mao-era tactics. The South China Morning Post agrees, publishing the following cartoon and calling Bo’s exit a setback for leftists: 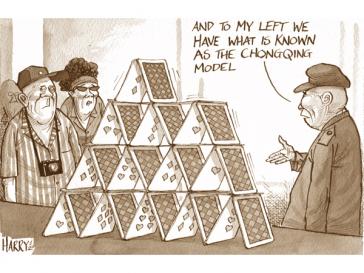 For those of us who were around in 1989, one of the key factors that fueled the massive demonstrations that year was the split at the very top of the Chinese political hierarchy, a difference of opinion on how to deal with the students in Tiananmen Square. Roughly, Zhao Ziyang seemed to be seeking some sort of compromise, while Li Peng took a harder line. That difference ultimately led to the failure of the first deployment of military power in May and the eventual downfall of Zhao. Since then it appears that everyone at the top of the political order, especially the Politburo, learned the same lesson: if they let internal differences spill out into the public they could face another crisis of 1989 proportions.

Chinese politics, especially at the elite level, has been a rather staid and stodgy affair, at least since 1989. Bo’s fall has blown up the usually carefully controlled movements of the top leadership. Whatever happens, it is safe to say that working out the succession of the Standing Committee will be more time- and attention-consuming for the denizens of Zhongnanhai than we might have thought a few months ago.