Cui Yongyuan is a prominent Chinese TV personality, producer, film buff and author. He is currently the host of Talk to Little Cui (小崔说事) [zh] on CCTV-1. Cui has established himself one of China’s favorite social commentators, and is known for being vocally critical of CCP policy at the annual “Two Sessions,” where he sits as a CPPCC member. In  a post translating recent Weibo comments about China’s wealth inequality, Tea Leaf Nation quotes Cui:

Well-known talk show host Mr. Cui Yongyuan recently tweeted that his 10,000 RMB monthly salary was “not enough,” despite being more than twice China’s average of 4,000 RMB per month. According to Sina, Cui wrote, “It is very difficult to find a feeling of happiness with money matters.” He said the time that he “felt most rich, most like a millionaire” was in 1986. At that time his monthly salary was 80 RMB, but he felt he could not spend it all. Since then, much has changed.

Following is a quote of Cui’s from late 2011 that has been posted far-and-wide on the Chinese blogosphere, translated by CDT. In the statement, Cui addresses some of China’s most serious social problems – access to education, economic inequality and food safety. 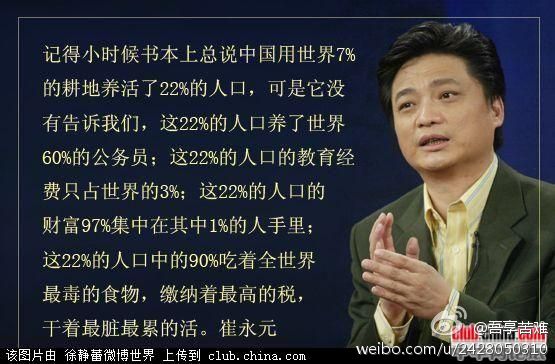 A NY Times blog notes that Cui Yongyuan was one of 72 members to sign a petition against the practice of black bear bile-farming by Chinese pharmaceutical companies.

Also see a translated interview from Cui’s trip to California last year, when he was researching for a TV documentary about the history of film, via Asia Pacific Arts.