Word of the Week: Shit Youth 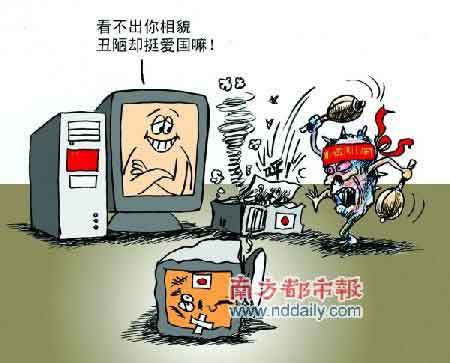 An angry youth smashes a Japanese computer while the onlooking Chinese computer snickers, “You don’t look ugly, you look patriotic!”

“Shit youth” (粪青) is homophonous with “angry youth” (愤青), young people who are extremely nationalistic and local. “Angry youth” often whip up anti-Japanese and anti-Western fervor; fenqing founded the website Anti-CNN in response to CNN’s coverage of the 2008 Tibet riots. Fenqing cause the Chinese government consierable anxiety, as they may organize and resist the control of the authorities. The derogatory shit youth implies that their fervor is irrational and even dangerous.

Tags :angry youth,fenqing,word of the week