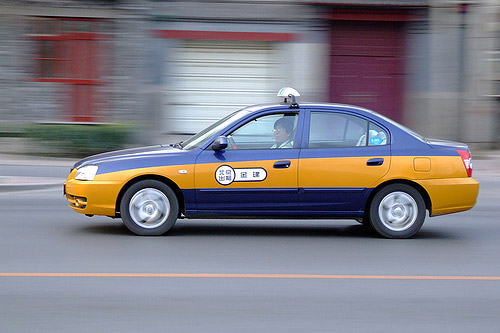 Beijing taxis will be stuffier than usual in the run-up to leadership transition of the 18th Party Congress, scheduled for November 8. The state-run Global Times reports that the rear windows of Beijing taxis are locked until further notice to prevent passengers from “handing out leaflets with adverse information.” The notice below, posted to Weibo by @luhualuhua (@卢桦), instructs cabbies on this “zero spread rule” and other regulations: (2) The fuel surcharge can be collected for all trips exceeding (but not including) three kilometers.

II. Strengthen Monitoring of Vehicles and Drivers Involved in of Meter Tampering

(1) Taxicab companies are to reinforce inspection measures. Meters discovered to have been altered must be removed without exception. Infractions committed by a driver must be dealt with in terms of a breach of contract.

(2) If a problem is investigated and prosecuted by law enforcement officials, persons involved will assume the consequences, including the responsibility to pay related fines.

(2) During the 18th Party Congress period, taxicab drivers are to be on guard for passengers carrying any type of ball. Look for passengers who intend to spread messages by carrying balloons that bear slogans or ping-pong balls bearing reactionary messages.

(3) During the 18th Party Congress period, if driver finds himself on a route through areas of political importance, he must find a detour. Pay attention to technique and manner in order to avoid unnecessary conflict with passengers.

(4) During the 18th Party Congress period, drivers are to regularly inspect the inside and outside of their vehicles in order to ensure lawbreakers have not affixed reactionary materials or messages to the vehicle.

IV. Use of Taxicab Stand at Beijing West Railway Station’s Southern Plaza and Locations for Solicitation*

South: East-west extension of entrance and exit to West Station Southern Plaza underground parking lot, at the intersection of East Road and the public transportation stand.

West: West curb of East Road at the entrance to Lianhuachi Park

* These areas were not open until late September. Back.