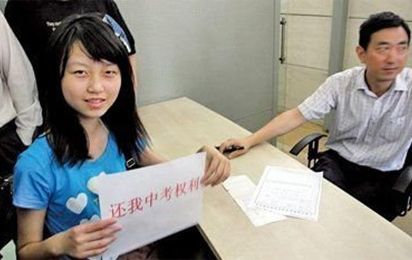 Zhan Haite has been refused entry to a Shanghai high school because her hukou is from rural Jiangxi Province. She is petitioning for her right to an education.

Central Propaganda Department: No media will report or comment on Zhan Quanxi and Zhan Haite in Shanghai engaging in so-called “rights defense” in the name of equal participation in the high school entrance exam and getting involved in conflicts with personnel. (December 11, 2012)

Central Propaganda Department: With the exception of Xinhua wire copy, media in all locales are not to republish, report, or comment on online rumors of a wave of complaints emerging from the Chongqing beat black campaign, questions about millions in assets from mafia deals, and other issues. (December 11, 2012)

Central Propaganda Department: All levels of media must follow to the letter previous requests in reporting on issues involving central Party leaders. You may not use any other source but Xinhua wire copy. (December 11, 2012)

Central Propaganda Department: With regards to reports about the Jinan municipal government building, all media must without exception employ Xinhua wire copy and cease voluntary reporting and commentary. (December 12, 2012)

The Long’ao Building, apparently second in size only to the Pentagon, is rumored to have cost over 4 billion yuan to construct [zh]. Authorities claim that no public funds were used.