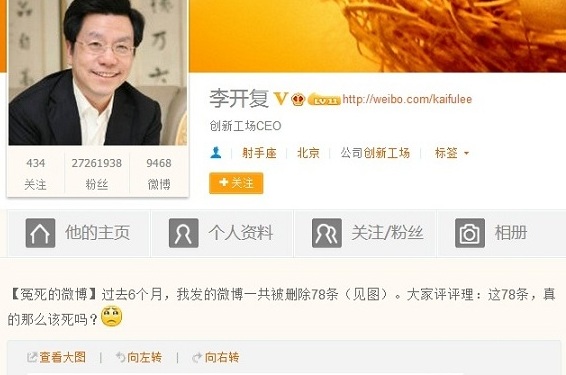 Kai-fu Lee, dubbed 2012’s most influential Weibo personality by Sina, has decided to market more than his self-help books today. Google China’s former CEO has just posted an image of every single post deleted from his Weibo account over the last six months:

@kaifulee: [Innocent Weibos Hounded to Death] Over the past 6 months, 78 of the weibos I posted were deleted (see the image below). What do you all think: did these 78 posts really deserve to die? As of posting, Lee’s weibo of weibos has been reposted 5447 times and commented on 3581. It has not yet been removed.

A business guru and best-selling author, Lee is not a political activist by any means. Nor does he have personal grievances with the Chinese government; Taiwanese by birth and American by citizenship, he only stands to lose business from his current perch in mainland China. For Lee to broadcast such carefully documented evidence of censorship to his audience of over 27 million followers is to bring a “fringe” concern to the mainstream. His move comes just weeks after Yao Chen’s viral weibo in support of the Southern Weekly protesters in early January. Everyone is affected by censorship in China–now they’re talking about it.

A sampling of Lee’s defunct posts:

@kaifulee: This many? If I hadn’t seen the post below, the rate of deletion would have risen from 16.3525% to 16.3526%. //@SparrowScience: [How Many Weibos Disappear?] How many posts are deleted inside the Wall? This March, Carnegie Mellon University did just this kind of study. Among 1.3 million Weibo posts they observed, 212,583 were deleted, a rate of 16%. “When I despair, I remember that all through history the way of truth and love have always won. There have been tyrants and murderers, and for a time, they can seem invincible, but in the end, they always fall. Think of it–always.” ― Mahatma Gandhi

There are plenty of vicious attacks on Lee among the comments he received, but each one carries the taint of the Fifty Cent Party. Praise for Lee, on the other hand, is sincere:

@ieras: You know too much.

@miceecim: This one will soon be number 79!

@beautie-yes-itsher: Little Weibo Secretary, you’ve worked too hard. Have a rest and let them speak. Yuan Fang, what do you think?