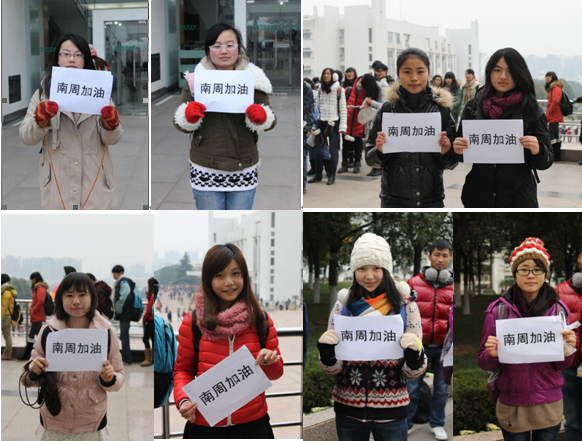 Central Propaganda Department: No media, official Weibo accounts, or individual Weibo accounts are to republish or comment on the Southern Weekly incident. Do not share the Global Times opinion piece or the incendiary Dragon TV program about the New Year’s greeting. Henceforth, it is forbidden to republish reports on the aforementioned incident. (January 4, 2013)

A segment from the Dragon TV program is available here [zh].

The Nanjing University School of Journalism and Communication issued this statement of support for Southern Weekly:

Through Weibo, we have learned that those in charge of the Guangdong Propaganda Department altered the Southern Weekly’s New Year message without authorization, and have indirect confirmation of this information from the great number of deleted posts and even greater number of netizens taking a stand against this. As an institution of media and communications which is full of hope for China’s future and which accumulates positive energy through education and hard work, we not only transmit professional knowledge, but moreover devote ourselves to the common pursuits of independent thought, the spirit of freedom, and the strengthening of moral character. We strongly condemn the trampling of journalism’s basic role and the backward actions which violate humankind’s healthy development. We ask the Guangdong authorities who are involved in this debacle to issue an explanation and an apology to the public.