Update: South China Morning Post reports that as of March 19 at 3:00 a.m. Beijing Time, over 13,000 dead pigs have been found in the Huangpu River and the waters of upstream Jiaxing, Zhejiang Province.

This sordid tale, inspired by Shanghai’s “pigfestation,” appeared on CarrotNet (萝卜网) last Thursday. It was first posted on the Sina blog of Zhao Yukun, who identifies himself on Weibo (@赵昱鲲) as the vice chair of the Global Chinese Positive Psychology Association. The authorship is unclear: the post on Zhao’s blog is now private [zh].

After more than 6,600 pig carcasses were found floating in the Huangpu River, a major water source to Shanghai, cartoons incorporating imagery from the film Life of Pi proliferated online. This story, “Life of Pig,” begins with a Photoshopped image of the film poster. The author alludes to the flimsy reassurances of the now-defunct Railway Ministry after the 2011 Wenzhou train crash, drawing a connection to the current handling of Shanghai’s “hog wash.” At a press conference immediately after the crash, Railway Minister Wang Yongping told reporters that it was a “miracle” that a toddler was found among the wreckage after the rescue searches had ended. Asked why the rail cars were being buried at the scene, Wang explained this was to “facilitate rescue efforts.” When the journalists would have none of it, he went on, “Whether you believe it or not, it’s up to you, but I do anyway.” Wang lost his job amid public outcry over his remarks. 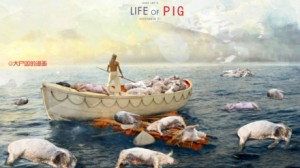 “Dear reporters, after you hear today’s press conference, you will believe in God.”

The opening statement of Shanghai government spokesman stuns the dozens of reporters in the room. The conference hall is completely silent. The spokesman begins, “Upriver along the beautiful and fecund Huangpu, there lives a hardworking and kind-hearted family. They keep ten thousand pigs, all of which are strong of body and sound of mind. Across the way lives another hardworking and kind-hearted family. They grow ten thousand banana trees, whose burgeoning leaves flutter in the breeze.

“But one day, a storm from the Pacific Ocean hits Shanghai and arouses the pigs’ curiosity. They tumble out of the pigsty, in awe at the might of God. But as the rain pours down harder, the pigsty is flooded. The pigs are flushed out to the Huangpu. At this critical moment, a gust of wind blows down all the banana trees across the road. Bunch after bunch of bananas falls into the river. The pigs quickly jump onto the bananas and drift down the Huangpu.

“They float for three days and three nights. Just as they become tired and hungry, a small island appears in the river. The island is dense with water grass. Meerkats dart from every corner. There is a small, crystal-clear lake. The pigs jump onto the island and feed happily. But at night, the situation changes drastically. Acid water surges up from the lake. The pigs realize that this is in fact a pig-eating island. They decide to give up this paradise, once again jump onto the bananas and float towards their idyll—Shanghai.

“Regretfully, just as they are about to reach Shanghai, the temperature suddenly drops. Sitting on the bananas and floating down the river, battered by wind and frost, the pigs freeze to death. But because they died of cold and not disease, they won’t impact the quality of the water in Shanghai. Everyone, please drink without worry.”

At this point, he points to a glass of water on the table and says, “You see, I got this glass of water out of the Huangpu today. I’ll drink it as a toast, and then you may help yourselves.” He picks up the glass and shallows it in one gulp. Then he shines the drained glass at the reporters, smiling and nodding with respect.

The hall falls silent. The reporters can’t help but be  transfixed by this astounding story. Some have tears in their eyes, others pray with their eyes closed or look up to the sky, murmuring.

Suddenly, one reporter asks shyly, “But we all know that bananas can’t float on water…”

The spokesman rebukes her, “I can just say that this is a miracle of life. Whether you believe it or not, I do anyway.”

“But most Shanghainese don’t believe in God,” another reporter chimes in. “Could you give us a story they’ll buy?”

“You want a story without miracles?” The spokesperson is now a little irritated. He sits up straight, scans the hall, and says, “Up the Huangpu, there are many people who raise pigs. They are selfish and never hesitate in harming other people to benefit themselves. They are afraid that if they bury pigs which have died from illness, the infection will spread. So when their pigs die from disease, they simply throw them into Huangpu. This has happened many times. Local residents have reported this to the authorities. When the dead pigs reached Shanghai, we also told the city government. But these farmers all pay tribute, so the local government doesn’t give a sh*t. We don’t know what to do, either.”

“An epidemic has been spreading recently. A lot of pigs have died. Those pig farmers still hold to their old solution, throwing the dead pigs into the Huangpu. By the time the bodies reach Shanghai, they’ve been pickling in the river for ages, and have already rotted. Would you say this water is fit to drink? I can’t say myself. But regardless, I wouldn’t dare to drink water from the Huangpu even if there weren’t dead pigs soaking in it. To be honest, the glass I drank just now came from a bottle of mineral water–are you satisfied now?”

“So,” the spokesman glares at them, “which story would you like to report?”

“The previous one…” “The first one…” The reporters murmur.

The spokesman smiles wanly. “Good. You have indeed chosen a miraculous occupation.”