Drawing the News: Life of Pig

As thousands more pig carcasses are fished out of the Huangpu River, a major source of water to Shanghai’s 23 million residents, government officials have failed to quell the public’s fears. The Shanghai Agricultural Commission says that porcine circovirus has been detected in some specimens, but that the disease is not communicable to humans. Meanwhile, the Zhejiang Agricultural Department states that many of the pigs, which were dumped into the Huangpu from a village in the province, froze to death. Zhejiang claims there is no porcine disease there.

Most ordinary people have a hard time believing the pigs are disease-free. Riffing on the 2012 Ang Lee film Life of Pi, netizens have created their own posters for a new horror film, Life of Pig. China Media Project featured two Pi-themed cartoons earlier today; CDT Chinese editors have collected more. 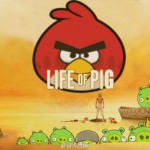 Richard Parker, the tiger Pi Patel shares his boat with in the film, has been supplanted by an evil pig from the video game Angry Birds. A cardinal looms large on the horizon, ready to knock out some swine. (Ichthy)

“The People of Mordor Eat Free ‘Meat Soup’ with Composure.” Man: “Honey, your soup today is really delicious.” Woman: “Of course! It’s made with more than 1,000 boiled dead pigs…” “Mordor” residents enjoy “meat soup” from a bowl adorned with the Shanghai skyline. A government official relaxes nearby with a bottle of Maotai. (Dashix) 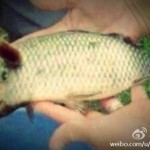 Wife: “You devil! Put on another vest! It’s cold down south right now!!!” A pig in an army coat suits up for a fateful trip. Artist Gouben adds this commentary to his cartoon: “Survey on Jiaxing Pigs Cause of Death: (1) Dissatisfied with their antibiotic-fortified feed, the pigs committed mass suicide by jumping into the Huangpu; (2) The water at the factory farms is so polluted that uncareful pigs drinking from the Huangpu drown; (3) Shocked that the Railway Ministry is no more, the grief-stricken pigs died in a stampede; (4) The pigs choked to death on smog. P.S. The Zhejiang Agricultural Department says the pigs froze to death.” (Gouben) 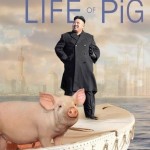 What does this incident say about the state of affairs in China? Artist Meng Chengshang has a pessimistic outlook in “Paired: The Huangpu River Is a Mirror of the Chinese people.” (Meng Chenshang)