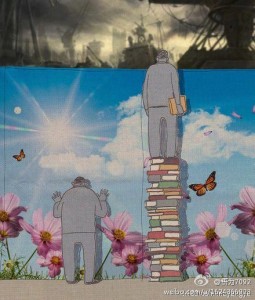 Foreign media and websites are off-limits as sources, according to new regulations. (@悟为7092)

Weibo and other social media have allowed journalists to skirt press censorship, posting information about the Wenzhou train crash, the Southern Weekly protest, and other major events on their personal accounts. Media organizations have even issued weibo in defiance of propaganda directives. The government has caught on and is now attempting to stymy this outlet.

The State Administration of Press Publication, Radio, Film and Television, a new ministry formed from the merger of the State Administration of Radio, Film, and Television (SARFT) and the General Administration of Press Publication (GAPP), has issued a “Notice on Strengthening Control of Media Personnel’s Online Activities” (关于加强新闻采编人员网络活动管理的通知). It forbids media organizations from using foreign media or websites “without authorization” and newsmakers from “using Internet platforms to participate in activities such as seeking illegal benefits,” and requiring official Weibo accounts to keep records. Liz Carter of A Big Enough Forest has translated the full notice.

This is one giant step backwards, many netizens say:

子非程哥: Even Myanmar is more open than you.

何兵: I think you should just leave People’s Daily and kill every other newspaper. That way, it will be easy to manage, instead of being so annoying.

He Bing (@何兵) is a professor at China University of Political Science and Law and whistle-blower with a large Weibo following.

王冉: “That day you took a piece of red cloth/Covered my eyes and covered the sky…” (Cui Jian, “A Piece of Red Cloth”). In fact, when you covered your own eyes, you thought you had covered everyone’s sky.

Cui Jian is known as the “Grandfather of Chinese Rock.” He was banned from holding concerts in the 1990s for his participation in the Tiananmen protests in 1989.

豆豆和步步: I can’t stand it! Hmph, I’ll just scale the wall. Come and get me!

KCDUAN10: We’re just one about-face away from North Korea.

cullinanll: We just want to see how the infinite evils of capitalism exploit the people, how cold-blooded and ruthless, how vulgar and base, and to have a look at how their people live in the depths of hell… Mainly to throw into relief the superiority of our socialist state and our sense of pride… If you don’t let us know, how can we dream?!

RAE_YANG: The new SARFT just got on the horse and rode China back 30 years.