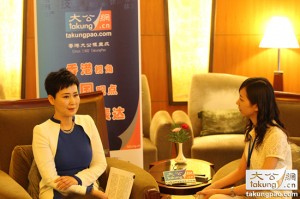 Ta Kung Pao, a Hong Kong newspaper funded by the Chinese Communist Party, published an interview with China Power International Development CEO Li Xiaolin yesterday. Li is the daughter of former prime minister Li Peng, known by some as the “Butcher of Beijing” for his part in the brutal crackdown on the Tiananmen protests in June 1989. Li Xiaolin is no darling of the Chinese public, either: the designer outfit she wore to the 2012 National People’s Congress drew sharp criticism.

Netizens are now irked by Ms. Li’s statement to Ta Kung Pao that her biggest regret in life is having only one child. Her father told her that as national leaders, they must diligently uphold the law. “So my generation is a generation that has sacrificed” (所以我们这代人也是付出的一代). She also told the paper that when her grandparents’ graves were moved to Hainan Province, her parents would not let her go with them to pay her respects. “After I graduated from college, I spent my first month’s wages on a trip to Hainan to sweep my grandparents’ graves” (所以我大学毕业后赚了第一个月的工资真的就是去海南给爷爷奶奶扫墓).

Named one of the most powerful women in business by Fortune, ordinary Chinese readers have little sympathy for Li’s story of struggle. From Weibo:

苦逼锅: My biggest regret is that my dad isn’t a state leader; he’s merely a family head.

程圣中: The accumaltion of information, process of writing, and dissemination of this article reminds us of a line from a poem by Tsangyang Gyatso: “How many secrets must a person hide before he can live his life skillfully?”

孔维浩_: The country’s entire electric grid belongs to your family and here you are talking about transparency, credibility, sacrifice, and how “the bottom beam will be crooked if the the top beam isn’t straight.” Huh, no one is the most shameless; it’s just that some are more shameless than others.

优选小麦: How many college students did Butcher Li kill? One day this blood debt will be repaid.

评论员李铁: I truly object to advocates of family planning arguing that mouths to feed are burdens. But certain people are indeed burdens. Or more frankly: tumors?

林滤山: You’ve sacrificed so much and gotten so little in return!