Corruption in Chongqing: There’s an App for That 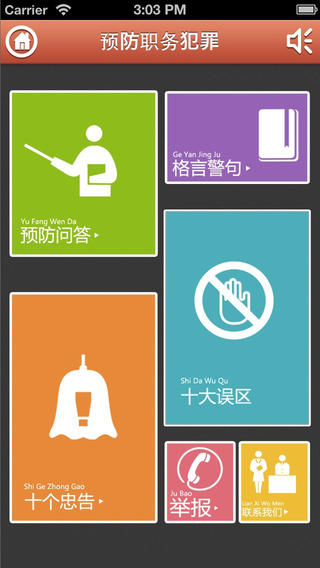 As Chongqing strives to clean up a reputation tainted by the downfall of its former Party chief Bo Xilai, city prosecutors have commissioned a smartphone app to help the public identify and report corruption. From Adrian Wan at South China Morning Post:

The app, the first of its kind on the mainland, contains information about the responsibilities of civil servants – explaining what they should and shouldn’t do – by presenting questions and answers, real-life case studies, and related laws.

It also claims to make it easier to report crimes among cadres in Chongqing, but some users lamented that the app’s “report” function simply provided an address and phone number for local prosecutors.

[…] It also contains several quotes from President Xi Jinping , including ones about the importance of serving the public and weeding out corruption. [Source]

A recent political development report from the Chinese Academy of Social Sciences warned that “inefficiencies” in official systems are driving people to “irregular” means of political expression. By referring users to the prosecutors, the app seems intended to smooth out such inefficiencies and divert people into “healthy” channels of participation.

Wan reported scathing responses on weibo, but the app does currently have high ratings in Apple’s Chinese App Store. Even those who gave it high scores initially seemed unconvinced that software would prove a potent weapon against the tigers and flies of corruption. Comments to that effect—those in square brackets below—disappeared over the weekend, however.

carina34: ★★★★★ 偶然下载了这个应用，对于非专业人士来说，内容基本能看懂，而且觉得非常有趣，推荐![一個軟件能反腐？]
I happened to download this app. Speaking as a non-professional, I could grasp the basic content, and found it extremely interesting. I recommend it! [Can software fight corruption?]

iPhone5SSSSSS: ★★★★★ 今天在網上看到一個軟件能反腐，我好奇。[国际玩笑]
Today I saw online that a piece of software can fight corruption, I was really curious. [This is a big joke]

le mo n: ★☆☆☆☆ 靠手机软件防腐反腐这是腐政又在开国际玩笑了。
Relying on a mobile app to prevent and oppose corruption is just our corrupt government making another big joke. [Source]

(That the lone one-star review remained intact may suggest that the others were altered by their original authors, rather than by Apple or anyone else.)

The effectiveness of the app’s content and functionality appears to be a secondary concern for those behind it, however. An unnamed official told Global Times that “the main purpose for us to launch this app is to remind government officials that they are being supervised, and it is not a good idea to trade their power for cash.” This is not the only message corrupt officials have been receiving, however: Global Times also reports that many officials escape punishment for corruption after being warned that they are under investigation.