Ideological orthodoxy has long been a top Party priority, and in recent years digital technology has been increasingly utilized by authorities toward that goal. Xuexi Qiangguo, a slick Alibaba-made app designed to teach users Xi Jinping Thought, at one point had more than 100 million active users. The name is a double entendre, literally translating to both “study, strengthen the country,” and “study Xi, strengthen the country.” In 2019, CDT Chinese wrote about a tool called “Fuck Xuexi Qiangguo” (FXQ), which could be overlaid on the app to help users attain their “daily scores” by simulating their video watching and news reading:

In March 2019, a new “Xuexi Qiangguo points earning tool” appeared on the popular software development hosting site Github. The software was described as “a program that helps adults (and possibly also children in the future) to automate the learning process.” The software’s eye-catching name highlighted the developer’s distinctive personal attitude towards Xuexi Qiangguo. In recent years, many local government departments, businesses, and public institutions have required that employees install the Xuexi Qiangguo app, which allows users to collect points for logging in daily and participating in learning activities. [Chinese]

On March 4, after the FXQ app had been available on Github for more than two years, the developer of the “points earning tool for lazy people” announced that the tool would no longer be updated. The developer explained that he now saw little impetus for its continued development:

FXQ has already been around for more than two years, but on the occasion of 2021’s “Two Sessions,” it’s time to bid it farewell. The project received more than 7.1K stars and 1.7K forks on Github, and many people have wanted to contribute (I refused). To be honest, I’m not interested in these figures, in personal wealth, or in fame. I built this not for the purpose of gaining anything. My original motivations were pure and simple–I just wanted to make it available for the people around me, and I put it on Github so that more people could rid themselves of their mandatory ideological training, which promotes a cult of personality and fanatically controls people’s beliefs. So fuck Xuexi Qiangguo, the cult of personality must end. Please forgive me for being a little selfish, I decided to stop updating the app because the people around me were no longer required to use Xuexi Qiangguo. If people are forced to use it again, I might change my mind. [Chinese] 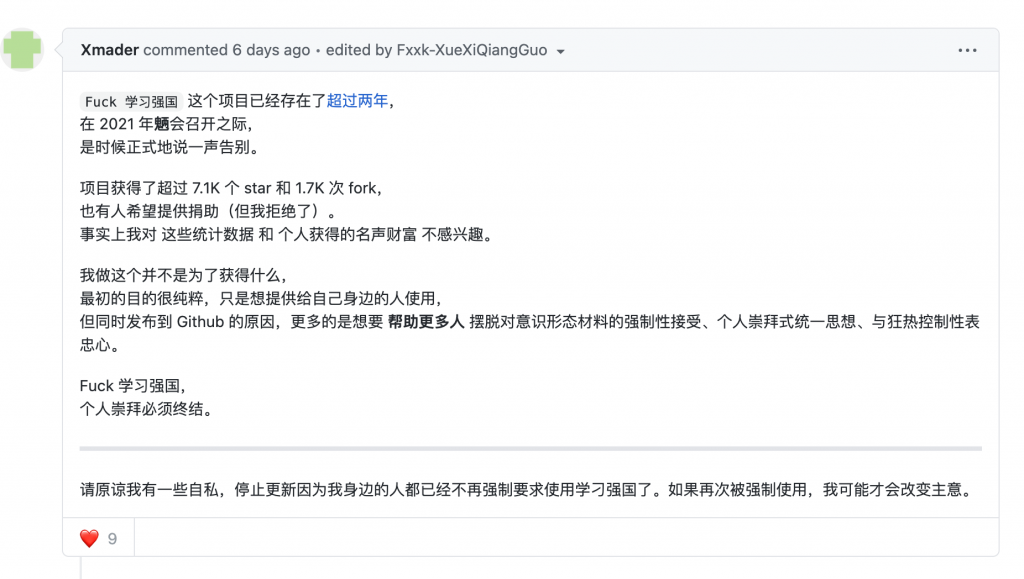 The developer’s explanation on Github.

According to netizens, completing the four tasks of “logging in, reading articles, learning from audio-visual content, and prolonged audio-visual content learning” every day can earn users a maximum of 25 points, but there is no way to use FXQ to complete more complex tasks, such as answering questions, which can earn users a maximum of 66 points. FXQ can ensure that daily users don’t “fall behind” (earning above ⅓ of maximum points), so it is helpful for users who don’t want to use the app but are nonetheless required to. 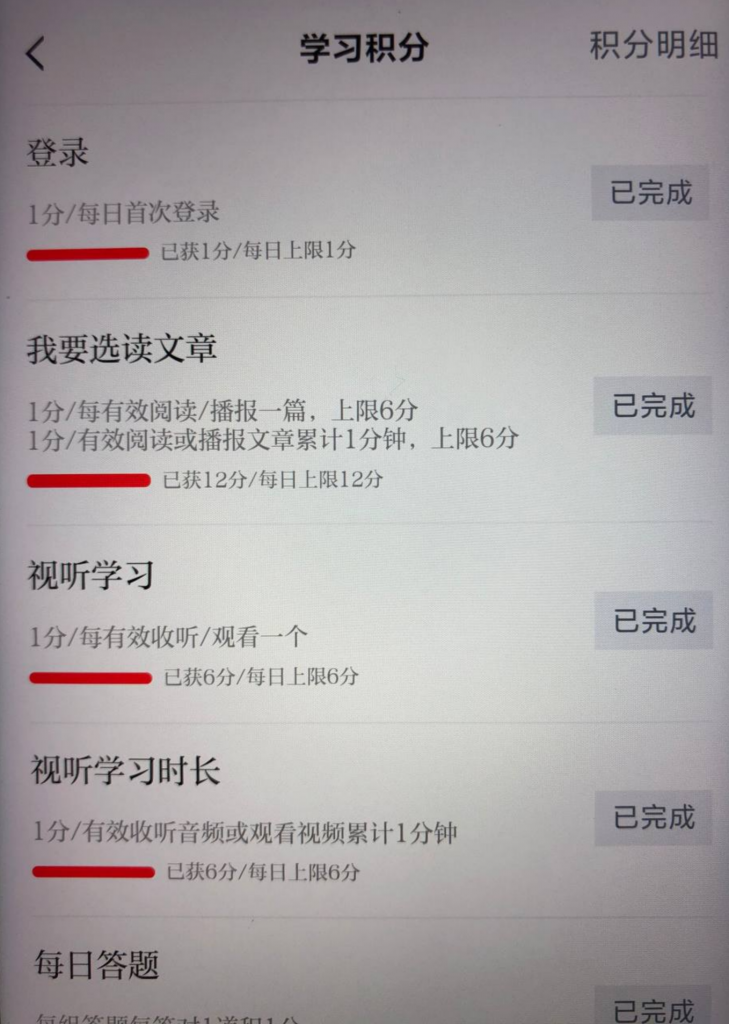 The four main daily tasks that could be completed by the tool.

As could be expected, FXQ attracted controversy. Some “people with firm beliefs” thought that the tool should be banned because it was “opportunistic,” and believe that “studying Xi” should be done solemnly and seriously. In contrast, some who oppose the Party saw the tool as actually abetting people’s “institutionalization,” and believe that people who enter and depend on the system ought to pay the costs of being part of that system. They thought the tool didn’t change the reality of users being treated like primary school children, and only fostered the growth of the Xuexi Qiangguo monster. As early as 2019, there were government supporters in the discussion section of the project demanding the developer stop, issuing threats to report the developer to Xuexi Qiangguo and the Central Propaganda Department.

In February 2020, the developer published Xu Zhangrun’s “When Fury Overcomes Fear” in the program’s Github discussion section with the aim of “a widespread awakening of conscience among ordinary party members.” This was met with ridicule and opposition, and the developer commented about ongoing preparations to immigrate.

Below is a selection of translated netizens’ comments on the FXQ Github collected by CDT Chinese Editors over the years:

z-vicoo: Hello, I am a low-level cadre at the grassroots level. I was forced by my superiors to log into 67 different Xuexi Qiangguo accounts, constantly logging in and out over and over. If I occasionally forget to log into an account, I’m scolded and reprimanded. I’m so tired. I want to ask if you could add a feature to speed up this process, because logging in and out over and over makes me want to collapse. Nevermind attaining however many points, even one point is fine. This job makes me feel like my life’s value is no more than dust, I’m begging you ~

YangQing-Lin: My school just started requiring us to use Xueqi Qiangguo today, never thought that one search would lead me to this tool. Our student party group gratefully sends you stars.

hljafg: I’m not a Party member, and have only been working a year. My manager asked me to operate his Xueqi Qiangguo account and I didn’t dare refuse. I’ve become a human robot for several days now, so tired. I’ve looked for plug-ins, but heard that they can lead to accounts being banned. I figured I’ll combine this software’s assistance with a little bit of my own learning on his phone. Hopefully I won’t end up getting my manager’s account blocked. I have a colleague who helps operate our director’s account, he helps him earn 50 points a day, so I earn 30 points a day. How can I tactfully tell him to not take it so seriously?

benladen: I support the developer, and nominate him for CCTV’s “Touching China” award.

AeneasZhu: All these internet Red Guards raising banners of patriotism, morality, positive energy… attacking people all over the place and forcing them to kneel… how did this happen, and why, even as our lives improve, are there more and more people like this? And they’re getting even more vicious, not only forcing everyone to conform to the same political opinions, worldviews, and values, but also the same sexual orientation, spousal preferences, and romantic preferences. Is it really because they cannot tolerate difference?

jmdqnm: The Xuexi Quangguo proxy services that used to be available on Taobao might have run into issues. I bought one on Taobao last month, previously 20 a year, but today when I clicked on the website it said it had been closed by admins. Almost no response for an hour now, feels like something happened.

neutronemu: I don’t want to start a war, but I want people to see clearly the perverse responses of some of these commenters, which only serves to underscore the greatness of this coder.

stonebreaker2019: (Anti-cheating plan) While using the app, you should be properly dressed and have your camera switched on. // Don’t doubt it, it’s really possible. I just discovered in the app’s “account and security” section there’s a facial recognition feature. In the event that this feature is really required in the future, it might need a few minutes to scan your face.

CT-ABT: To be honest, I want to say that of the tens of millions of Party members, not a single one… wants to be treated like a child, rushing to finish their homework every day, and they can’t continue to bear things this way. In fact, I want to ask all Party members: Seven years ago, did you think it would turn out this way? Five years ago, did you think it would turn out this way? Even three years ago, you couldn’t believe that things would turn out like this. But what have you done? Whether you are here to taunt OP, to praise OP’s high-level black achievement, or to rejoice at finding a tool for circumvention—it’s all useless. If the status quo continues to deteriorate at an accelerating speed, there will come a day when we pass beyond the point of no return. Has anyone given this any thought? [Chinese]