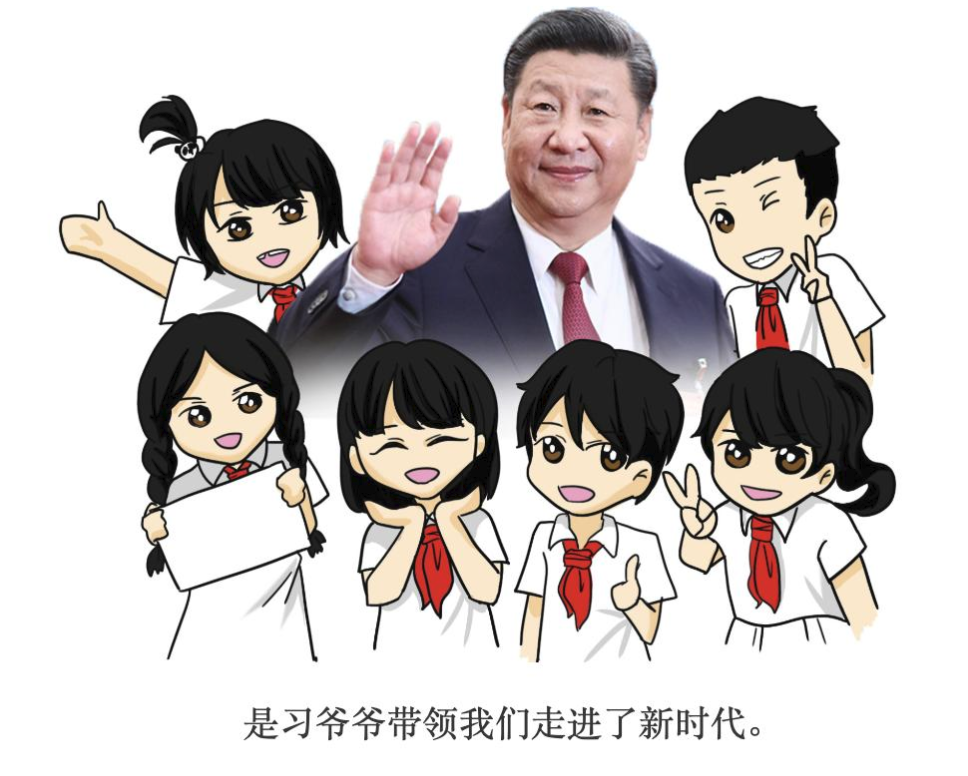 CNN’s James Griffiths, author of the recently released book “The Great Firewall of China: How to Build and Control an Alternative Version of the Internet,” reports the launch of a new mobile app aiming to ensure the political orthodoxy of China’s schoolchildren.

According to the state-run Global Times, the new app and website is designed to help elementary and middle school-aged children “learn about new socialist thought and Chinese classics as part of a campaign to consolidate their belief in the party and inspire them to be reliable socialist successors.”

Lessons on the platform — run by the People’s Daily, the official mouthpiece of the Communist Party — include “I am Chinese,” which introduces children to the country’s “56 ethnic groups living in harmony,” and “Building a well-off society.”

Another lesson explains how “Grandpa Xi led us into the new era,” replete with illustrations of President Xi Jinping alongside smiling children.

Global Times said the app was launched as part of a campaign begun in January by the Ministry of Education to “allow students to better understand socialism in the new era through reading Xi Jinping Thought on Socialism with Chinese Characteristics for a New Era and classics President Xi has quoted in his speeches.” [Source]

People’s Daily’s other current ventures include providing services to other companies in the burgeoning field of outsourced censorship.

As Griffiths notes, the app is part of a broader push to promote Xi Jinping Thought, which according to Karrie Koesel at the University of Notre Dame is now the focus of 20-25% of all questions in the politics portion of the national university entrance exam. At The New York Times on Sunday, Javier C. Hernández examined the officially boosted spread of Xuexi Qiangguo, a gamified ideology app created by Alibaba and the Party’s Central Propaganda Department. Its ambiguous name can be read as “Study and Strengthen the Country,” the punning “Study Xi and Strengthen the Country,” or, in Hernández’ rendering, “Study the Great Nation.”

Tens of millions of Chinese workers, students and civil servants are now using Study the Great Nation, often under pressure from the government. It is part of a sweeping effort by Mr. Xi to strengthen ideological control in the digital age and reassert the party’s primacy, as Mao once did, as the center of Chinese life.

[…] Schools are shaming students with low app scores. Government offices are holding study sessions and forcing workers who fall behind to write reports criticizing themselves. Private companies, hoping to curry favor with party officials, are ranking employees based on their use of the app and awarding top performers the title of “star learner.”

Many employers now require workers to submit daily screenshots documenting how many points they have earned.

[…] David Bandurski, co-director of the China Media Project, said the app was a way for Mr. Xi to ensure that Chinese families are invested in the life of the party at a time when many dismiss propaganda as stilted and irrelevant.

This article about 学习强国 is astounding; rarely does contemporary rhetoric so STRIKINGLY echo decades past. “Everyone studies voluntarily and has very high scores” is almost verbatim the stuff ppl said in the documents I read from the Great Leap forward. https://t.co/WFqL2GwYMf

In February, Bandurski wrote that the app “reinvents the process of ideological dominance for the digital era” and “illustrates and underscores […] the potential of the smartphone as a tool through which authoritarian regimes can shape and reinforce dominance over the population.” Also in February, What’s On Weibo’s Manya Koetse posted an extensive evaluation of the app, its contents, and its public reception.

Last week, Xuexi Qiangguo was the subject of an NYT op-ed by Audrey Jiajia Li:

[…] To do well on Xuexi Qiangguo requires a serious time commitment; those under peer pressure to use the app are typically expected to score two or three dozen points a day, and sometimes more. “Thirty points per day would only put me at the bottom among the members of the party branch I belong to,” one user on Weibo, China’s equivalent of Twitter, told me. “My colleagues are so passionate about competing,” the user said, that they felt under pressure to earn the daily maximum of 66 points a day “to make sure I don’t get left behind.” (Late last month, after complaints from users who said they had to spend hours each day using the app, the government revised the ranking function so that users could no longer see one another’s scores, and revised down the daily cap to 52 points.)

In my first few weeks, I’d been getting a few points for just logging in, along with occasional peak-hour login bonuses. Reading articles on it and watching videos brought in another couple of points. But to really score highly, I needed to take the quizzes — to answer questions on Mr. Xi’s speeches and works. That was where the real points were: If I correctly answered all the quiz questions, I could earn 24 points total.

[…] I gave up after about half an hour, earning a measly nine points. “Post your point of view and collect one point,” the app prompted. Why not? I thought, and moved into the comment section, only to be greeted with instructions like “only valid points of view will be awarded points” and “good comments will be prioritized for display.”

[…] So how effective has this new app effort been? Online user feedback is currently prohibited on the Apple app store, so we can gauge user’s reactions only through their earlier comments, before feedback was turned off. “Good, good, good,” one reviewer wrote. “Whatever you want me to say.” “We voluntarily downloaded this,” wrote another reviewer, who gave the app one star. “Truly.” [Source]

Both Li and Hernández note the emergence of tips and tools for gaming the system, which Philip Spence examined in greater depth at Foreign Policy early last month:

[The app has] left less technically adept officials in a pickle. Over Spring Festival earlier this month, many reportedly asked their kids to help them download and answer questions so they could rank up on the leaderboard. And like leveling guides for video games, there are plenty of popular articles online guiding busy officials on how to earn points most efficiently. Tech-savvy users have even attempted to develop some “aimbot” programs to earn points automatically and top the leaderboard, but the app prevents that by giving points only if users spend a certain amount of time on each section.

[… G]etting around the system is also a time-honored tradition in China, and Xuexi Qiangguo users are already deploying tricks they have developed on other platforms. The Chinese taxi-hailing app DiDi, for example, has a big data-based credit system to score their drivers, but drivers have used hundreds of phones to make fake orders and artificially increase their rating. Last November, fans were accused of using bots to boost the Canadian-Chinese singer Kris Wu’s album to seize seven out of the top eight spots on the U.S. iTunes chart, even blocking Ariana Grande’s hit “Thank You, Next” from the No. 1 slot.

Even before the iPhone age, Chinese officials regularly outsourced their ideological obligations, including by using pre-written “self-criticisms” and having themselves edited into photos of inspection visits rather than actually making them. Today, many users find studying on the app is too time-consuming, so they just let the videos play on mute to rack up their points or look for score-earning guidance online. Others lean on relatives or subordinates. “I had to do all the tests for several seniors of my family. Made for a pretty fun Spring Festival,” one young man lamented. [Source]

After browsing through online tutorials that help you earn the most points, I turned to GitHub, the open-source software platform that China hasn’t banned yet. A keyword search gave me a project called “fxxk-xuexiqiangguo,” with close to 1,900 stars. The description reads, “A software that helps adults (perhaps children, too, in the future) xuexi automatically.”

[…] I took a dinner break while fxxk-xuexiqiangguo made its magic. Forty minutes later, it had read eight news articles — including one on the Sino-Indian border dispute and another on Han Zheng’s meeting with the Hong Kong Federation of Trade Unions — as well as two episodes of a TV show called Marx is Reliable (马克思靠谱). In the end, I received a total of 17 points — not bad considering how much effort I put in.

[…] I went back to GitHub to see how others perceived the hack tool. Many cheered, but some were worried about potential backfire from Beijing, fearing that the Chinese government could ban their access to GitHub once the platform becomes a playground for unfettered political speech. [Source]

Github was reportedly targeted in 2015 by a Chinese cyber-weapon dubbed “The Great Cannon” in an apparent bid to force the removal of censorship circumvention tools from GreatFire.org. That effort failed and, shielded for now by its economic value, the site has since hosted sensitive content ranging from other circumvention tools to allegations of corruption, material from labor rights and anti-sexual harassment activists and suppressed house churches, and protests against tech industry working conditions.