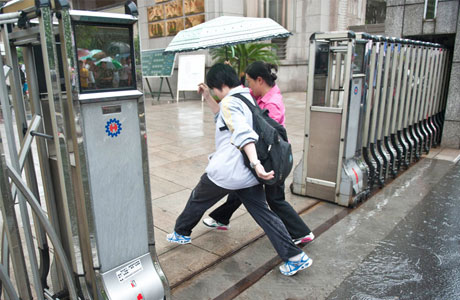 Although discussions over modifying China’s household registration or hukou system have been underway for some time now, progress has been slow. At Caixin, Wang Su looks at the government’s renewed efforts to push for hukou reform amid Prime Minister Li Keqiang’s urbanization goals and the difficult questions of balancing liberalization with population control and urban management:

The Li government wants to encourage hundreds of millions of rural folk to move to cities over the next decade. To that end, a proposal for “full liberalization” of the hukou system was recently proposed by the head of government’s chief economic planning agency, the National Development and Reform Commission (NDRC).

[…] While central and local government officials nationwide “have reached consensus on policy direction” for hukou reform “there is a great deal of conflict about how to carry this out” because “behind household registration reform is money,” Ma said.

Land and tax reforms could help raise funds needed for social services that would have to expand if more non-native residents of a community were granted permanent residency status, Ma said. But lately government debt concerns are rising, and it’s increasingly difficult to attract new investments.

Another way to push reform, officials say, would be to focus attention on smaller communities such as towns whose governments fall under the jurisdiction of much larger cities next door.

[…] The program’s challenges, Shao said, are linked to housing and the province’s limited space for new construction. Since quotas for housing are issued to only permanent residents, he said, any increase in the latter would put pressure on housing allotments. [Source]

A Caixin editorial argues that the task of implementing hukou reform should not be shouldered by local governments alone, but should be carried out with the leadership of the central government:

However, to date, the central government is still only responsible for arranging for reforms in principle while the power to implement them has been left to local governments.

This step-by-step approach is clear, but will be hard to implement if local governments continue to make use of it selectively. In fact, local governments should not carry out the reform or bear the costs alone. The central government should take the lead.

[…] Currently, local governments are bearing most of the cost of the reform, which is why progress has been slow.

See previous CDT coverage for more on migrant workers and the hukou system.