Echoes of June 4th, from Zhu Rongji to Michael Jackson 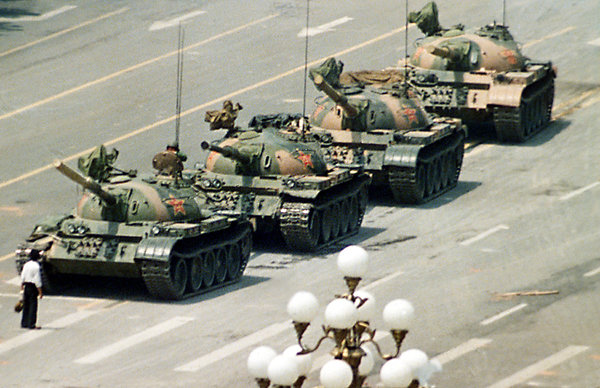 Echoes of Tiananmen have emerged this week in areas as diverse as a Beijing Cirque du Soleil performance and disputed comparisons with the harsh crackdown underway in Egypt. The Economist’s James Miles highlights another reappearance of June 4th in a new collection of speeches by former premier Zhu Rongji, who oversaw Shanghai’s response to the 1989 protests as mayor.

Amid all their fanfare over the release of the 600-page book, the Chinese media have carefully avoided discussion of its pivotal topic: the handling of the pro-democracy unrest which erupted in Tiananmen Square and spread across the country. Of the 106 speeches and letters the volume contains, seven relate strongly or entirely to this issue. They offer unusual insight into Mr Zhu’s very different approach to the handling of the protests in Shanghai, as compared with the violent suppression of those in Beijing.

[…] Mr Zhu thus joins the handful of party elders who have attempted to distance themselves from the bloodshed in Beijing. Whether Mr Xi, if he were ever to be faced with similar unrest, would take note of such reservations is unknowable. A speech he delivered in late July suggested that he might have worries about how the army itself might react to being used for such a purpose again. He said troops around the capital had a “special mission”. He added: “We must make sure that troops obey the command of the party and are absolutely loyal and reliable.” [Source]

Zhu’s enduring status and the focus on Shanghai rather than Beijing may account for his speeches’ publication, but there is no clear explanation for the fleeting appearance of Tank Man during Cirque du Soleil’s Michael Jackson tribute. From Edward Wong at The New York Times:

The Cirque du Soleil dance show used Mr. Jackson’s music, including “They Don’t Care About Us,” an overtly political song whose lyrics are full of rage. “Tell me what has become of my rights?/Am I invisible because you ignore me?/Your proclamation promised me free liberty, now/I’m tired of bein’ the victim of shame,” the song says. Along with the lyrics, Cirque du Soleil featured a montage of images showing civil rights abuses and protests, including that of the Tank Man.

[… Cirque du Soleil spokesperson] Ms. Silverman’s assertion that the show had been officially reviewed in China has raised the question of whether a government official allowed Tank Man to stay in the video. The Culture Ministry did not respond to questions on Thursday.

It could be, though, that blanket censorship of all things related to June 4, 1989, has resulted in such widespread amnesia about the episode that even some censors can no longer recognize the taboo material for what it is. [Source]