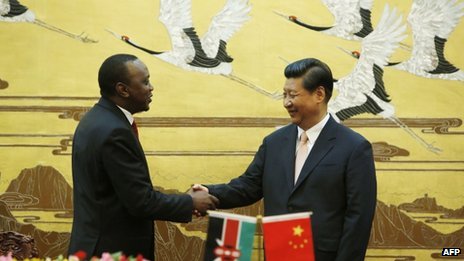 In what some viewed as a snub the the U.S., new Kenyan President Uhuru Kenyatta paid his first overseas visit to China and Russia. In Beijing, he met with President Xi Jinping and Premier Li Keqiang and secured $5 billion worth of deals, including a railway deal and energy and wildlife protection projects. From the BBC:

In a statement, [Kenyatta’s] office said the deals with China were a “massive boost” to his government.

“The rail link, particularly, is important in the context of East Africa’s shared goal of ensuring quicker movement of peoples, goods and services,” it quoted Mr Kenyatta as saying.

It will link the Kenyan border town of Malaba with the port of Mombasa, one of the busiest in Africa.

Mr Xi said China was also exploring other areas of investment, including in agribusiness, irrigation, fertiliser production and purchases, and technology. [Source]

Despite Kenyatta’s proclamations, Jake Maxwell Watts argues at Quartz that China is benefiting much more than Kenya in the deals:

The deal, agreed during Kenyatta’s first state visit to the Chinese capital, includes energy projects, wildlife protection and, crucially, a rail link from the port at Mombasa to neighboring Uganda. China already has a significant presence in Kenya, as its biggest source of foreign direct investment—$474 million in total—and its second-largest trade partner. But $5 billion is a big commitment, given that bilateral trade was only $2.84 billion last year.

China’s first goal is closer ties with Kenya itself. Liu Guangyuan, China’s ambassador to Kenya, is pushing for Beijing to recognize the country as a strategic partner, a status that would place it ahead of most of Africa in the eyes of the world’s second-largest economy. By cozying up to Kenya’s new president, China can gain access to the country’s newly-discovered oil reserves.

[…] And Kenya’s just one part of the benefit this $5 billion will bring China. Beijing’s involvement in funding rail projects and close relationship with Kenyatta is likely to buy it access to the rail network that will allow it to reach Uganda, a landlocked central African nation where it has substantial economic interests. As Reuters reported last week, Uganda is borrowing crippling quantities of cash from China and has given it almost exclusive rights to build infrastructure in the country, promising loan repayments at a later date with money made from oil not yet drilled. In short, China is lending Uganda the money to pay Chinese companies to build infrastructure that ultimately will be used to move oil to China. [Source]

Kenyatta is facing trial at the International Criminal Court for crimes against humanity related to election violence in 2007. Read more about China’s relationship with Kenya, via CDT.

China Strives to Be on African Minds, and TV Sets