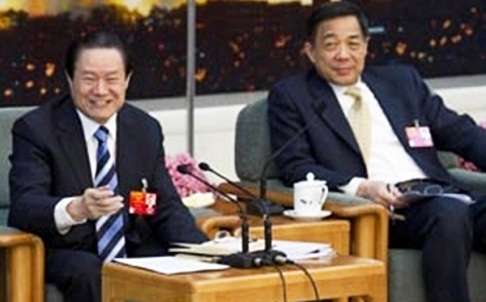 South China Morning Post follows up its report of an impending corruption probe into former security chief and Politburo Standing Committee member Zhou Yongkang. Investigating someone of such seniority is likely to be “a one-off,” analysts say, but even more than the trial of Bo Xilai which ended on Monday, it will nevertheless serve as a warning that no one is “untouchable.”

“If we apply the same criteria, even more senior officials should be investigated,” said Li Xigen, an associate professor at the City University of Hong Kong.

“But I don’t believe the authorities are willing or able to launch another investigation of this scale.”

Other analysts agreed Zhou’s case was a one-off. They said Zhou was being probed because he had become politically vulnerable and the signs of corruption were too strong to ignore.

Zhang Lifan , a historian and political commentator, said: “From a [broader] political perspective, investigating Zhou will bring an end to the tacit agreement not to investigate a Politburo Standing Committee member [for corruption]. “This case will set an important precedent. There won’t be any untouchable in the future political struggles.” [Source]

While Zhou may be the final domino among the Party elite, his investigation could lead to foreign probes of his former employer, the China National Petroleum Corporation. From the Post’s Toh Han Shih:

CNPC’s subsidiary, PetroChina, is listed in New York, rendering both companies vulnerable to investigation by the Department of Justice and the Securi- ties and Exchange Commission, said Keith Williamson, the head of forensic and dispute services in Hong Kong and mainland China at Alvarez & Marsal, an international professional services firm.

“With cases of alleged corruption that involve companies which have some connection to the US, I expect the US authorities to make an initial assessment of whether the alleged corrupt activity involves entities incorporated or listed in the US,” Williamson said. [Source]

In another headache for CNPC, China’s Ministry of Environmental Protection suspended approval of new refineries for it and Sinopec this week as punishment for consistently missed emissions targets.

Much of his success can be traced to his membership of the so-called petroleum gang – top officials who began their professional lives in the industry as the nation pivoted from oil exporter to importer in the 1990s. The change benefited state-owned oil giants that have exclusive rights to import crude.

[…] Zhou rose to the highest level of power – membership in the Standing Committee of the Politburo. But he exposed himself to attack by aligning himself with fallen princeling Bo Xilai – another champion of the truncheon school of policing. He was reportedly the sole member of the Standing Committee to disapprove of how the former Chongqing party chief was being handled before his sacking. [Source]

Authorities have unsurprisingly refused to confirm whether Zhou will be investigated. From Ben Blanchard at Reuters:

The Foreign Ministry declined to comment on the report when contacted by Reuters. The State Council Information Office, the public relations arm of the government, did not respond immediately to faxed questions about the report.

Zhou also could not be reached for comment on the report and Reuters could not independently verify it.

[…] In a sign Zhou may not be in trouble, the websites of the official People’s Daily and China News Service reported on Thursday that Zhou had sent flowers to the funeral of top nuclear scientist Liu Xiyao, as did Xi.

State media typically do not report such stories on party figures who have fallen from grace, so the brief news items could be interpreted as a signal he remains in the hierarchy’s good books. [Source]

A campaign against Zhou’s lower-level allies, though not proving that Zhou himself will follow, does somewhat boost the report’s credibility. From AP:

The Chinese government said Monday that China National Petroleum Corp. deputy general manager Wang Yongchun was being investigated on suspicion of “severe disciplinary violations.” Wang is said to be a close associate of Zhou. Three other executives are also being investigated.

Also, political associates of Zhou in the southwestern province of Sichuan, where Zhou served as a party chief between 1999 and 2002, have come under investigation, including Li Chuncheng, former provincial deputy party chief, and Guo Yongxiang, former vice governor.

“One by one, they fell, which clearly showed they were approaching him. The possibility is fairly high that they have come to a resolution” to investigate him, said Chen Ziming, an independent political commentator. [Source]