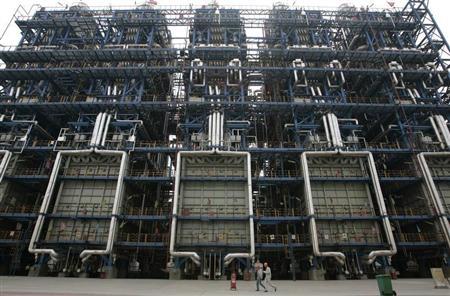 The ministry said in a notice posted on its website (www.mep.gov.cn) that it would suspend approvals of environment impact assessments for all new refining projects from the two oil giants, apart from any upgrades that target fuel pollution specifications or other environmental renovations.

“Such tough punishment on the two oil majors is unprecedented – it is a warning to others,” said Wang Tao, resident scholar at the Energy & Climate Program of the Carnegie-Tsinghua Center for Global Policy in Beijing.

[…] “Central government-run enterprises have enough technology and funds to resolve these problems – the problems arise in the subsidiaries but the root cause is in the group companies,” [People’s Daily] quoted an official with the environmental ministry as saying. [Source]

From Wayne Ma at The Wall Street Journal:

“The length of the temporary suspension will be based on the MEP’s assessment of their corrective measures,” said Tang Dagang, director of the Vehicle Emission Control Center, a policy research group also affiliated with the ministry.

[…] Ms. Li said the MEP’s move is a sign that China wants to focus on the quality of its refineries rather than on the speed of expansion.

CNPC and Sinopec have resisted costly upgrades to reduce pollutants at refineries due to Beijing’s tight control over fuel prices, which has made it difficult to pass on higher costs to consumers. However, the Chinese government unveiled major changes to the fuel-pricing system this year, which has improved bottom lines and made it easier for other overhauls. [Source]

CNPC faces other problems: four senior executives have been placed under investigation for corruption this week, and the company is also likely to be at the center of a reported investigation of former Politburo Standing Committee member Zhou Yongkang, who once worked there.