Will the Public Be Persuaded That PX Is Safe? 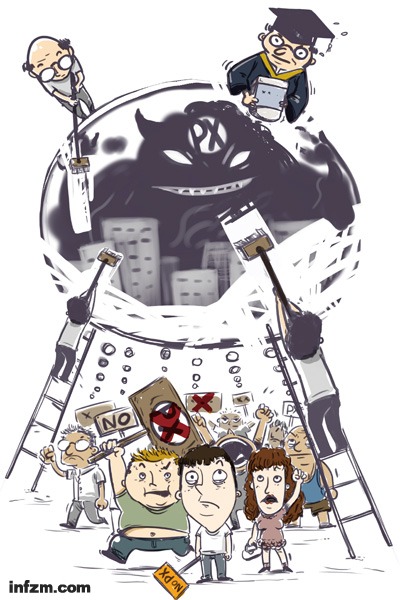 The week before last month’s explosion at a Zhangzhou PX plant, a Southern Weekly article [zh] now adapted at chinadialogue explained how the plant became a model for efforts to win public acceptance of the industry. From Peng Liguo and Gong Junnan:

Few people realise that during the peak of PX protests in Kunming and Chengdu, the Party Central General Office was writing to the Fujian city of Zhangzhou, asking for its experience and advice on telling locals about an incoming PX project. Zhangzhou is the site of the PX facility that was relocated from Xiamen after protests in 2008. […] A Zhangzhou public official who was unwilling to be named said that “mainly they wanted us to tell them how we’d persuaded the public.”

It is unclear how that report was disseminated, but the Zhangzhou approach is now being replicated in Kunming and Chengdu. To calm opposition to the Pengzhou petrochemical and PX project, Chengdu is planning to send members of the public to visit similar plants in Singapore and South Korea in July and August. [Source]

Read more about PX and other environmental protests via CDT.