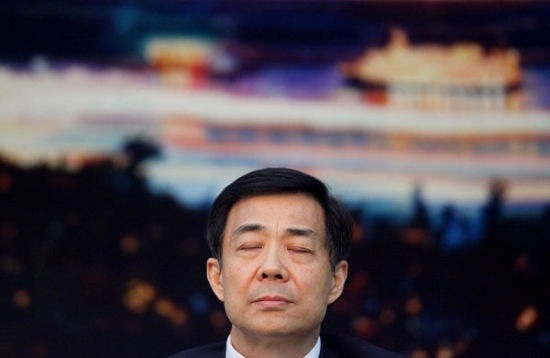 Bo Xilai was surprisingly outspoken at his trial last week, lashing out at his “insane” wife Gu Kailai and his former right-hand man Wang Lijun before revealing the “unrequited love” (暗恋) between the two. China watchers who anticipated a quick show trial were left wondering how far Bo had veered from the “script”–most observers expected a swift show trial, but Bo’s performance cast his complicity with the system in doubt.

For those who don’t have the time to read Xinhua’s official summary of the trial, an anonymous RenRen user has taken license to distill the drama of the five-day hearing into–what else–a script. You can also follow our liveblog of reflections on the trial.

A note on the translation: The Bo Xilai in this satirical piece often refers to himself as 劳资 láo zī, a play on the slang first-person pronoun 老子 lǎozi. 劳资 literally means “labor and capital.”

Prosecutor: Do you know the person who offered her money?

Governor-General: Somewhat, not quite.

Prosecutor: Did you offer him any perks?

Governor-General: I did official business according to official principles.

Prosecutor: Did you know that your wife and child got money from him?

Prosecutor: Didn’t she tell you?

Governor-General: Do you think people of our standing just bump into each other and start talking about money?

Prosecutor: Xu Ming, did you give money to Governor-General’s wife and child?

Prosecutor: Did he know that you did?

Governor-General: See? What did I tell you?

Prosecution: All this is evidence… (7,000 omitted)

Prosecution: Dammit, isn’t all this evidence?!!

Defense: These are all just depositions, all he-said she-said. Is there any physical evidence to show that I knew about the villa and my son’s travels?

Prosecution: …Testimony, testimony, one proves the other!!! Isn’t that sufficient?!!

Defense: Is it? Sufficient? Heh heh.

(1)
Prosecution: Mr. Wang Zhenggang, tell us, did he give you the idea to give money to his wife?

Defense: Did I call and ask my wife in front of you?

Defense: And I didn’t ask if anyone else knew about this?

Defense: Am I a f*cking idiot? I just embezzled money without checking if anyone else knew about it? Who do you think you are? Do I know you? How could I have called my wife in front of you to talk about embezzling money?

Prosecution: If you didn’t tell your wife, how could the money end up in your wife’s account? You must have told her! You must have!

Defense: Do you think I’m broke? My wife is no idiot, and she’s loaded? Do you think we really needed the 5 million yuan?

Prosecution: …You really are a pig!!!

Prosecution: Your wife said that you knew. How can you continue to deny it?

Defense: My wife…sigh. Let me tell you… I had an affair, so you know, my wife took my son and ran off to the UK. How could I know what happened after that? And what’s more, my wife killed a man. If she had committed any economic crimes, she would be dead by now. Of course she testified that embezzlement was my idea. We’re still in love. I don’t blame her…

Prosecution: …Dammit, what do you mean?! Before you said your wife is mentally ill, and now you say this!

Defense: I don’t mean anything by it, I’m just telling the truth. Your Honor, please take this into consideration.

Judge: Chief Wang, do you have anything to say?

General: Yes! Of course yes! His Highness and I have been like brothers for years. I helped protect his son when the young man went abroad. When his wife committee murder, I was the first person to tell him. I worked myself to the bone for him. But he, he, he… He beat me because of his wife! He beat me! He didn’t slap my face, he actually punched me! He drew blood! I was so heartbroken!!

Defense: You little fart! I made you my f*cking right-hand man. If my wife wanted to kill someone, you could have either stopped her or helped her. But instead you did nothing. You just let act like a fool and kill someone, and then let the investigation proceed. Then a month-and-a-half later, you told me, “I am the chief of police, I have to investigate. Your wife killed a man. You have to face reality…” F*ck me, tell me I didn’t owe you a good punch!

General: I was being responsible for you!

Defense: You two-faced bag of slime! It was you who had your lackeys turn her in! And still you play the loyal servant!

Defense: I have nothing more to say! Your Honor, I have just one more thing: he is talking nonsense! I hit him, he hates me, and he’s bullshitting. I leave it to you.

Judge: Everyone look at the camera: one, two, three, action!

Prosecution: we believe we have a firm case against the defendent. You see, we have testimony from your wife, your good friend, your former colleagues, and your son’s moneybag Xu Ming. Their depositions are mutually supportive, you see, and consistent, and credible!

Prosecution: In all, the evidence is irrefutable! Now you’re reneging, withdrawing your confession! On what ground do you claim that your testimony is true and everyone else’s is false? What punishment do you think you deserve for denying your crime?

Defense: Mutually supportive testimony my ass! I’ve pointed out a million inconsistencies in the witnesses’ testimonies. Didn’t your big ears catch that?

Look, all this corruption and bribery you talk about from when I was mayor of Dalian, what exactly did I do that wasn’t in the public interest? What did I do that wasn’t for the good of Dalian? Was supporting the soccer team a sin? Well, let me tell you, if that’s wrong, then I don’t want to be right! You didn’t like Dalian Shide F.C., eh? Aren’t you afraid a soccer fan’s going to pop you on the head with a brick for saying that?

After all these years, I should at least be credited for my effort, if not my accomplishment, in service to the party-state. Do you have any idea how busy I was? I was running all over the place. How can you possibly expect me day in, day out to remember “to bring the receipt, dear~”? What am I, an accountant?

Chongqing was so poor back then! It didn’t have sh*t. I visited every one of its 14 poverty-stricken counties. I was dog tired. And then I come home to hear about my son running off to some crazy place. My wife is a cultured woman of impeccable taste. Do you think she would quibble over chicken feathers and garlic peels with me? Who’s the idiot, her or you?

As for my second son, you all know that I also have an elder son. This is my second wife. She praises Guagua to the skies, in order to show how much more wonderful he is than my first son. How do you praise your kids? Do you brag, “My son has borrowed money again,” or “My son has been living it up,” or “my son is off to another party”? Could you do that?

I’m not boasting. I won’t ask any other question but this. You’ve investigated me for so long, you must have a clear answer—am I the kind of guy who cares about what I put into my mouth and wear on my back? You must know what I have in my closet. I don’t even f*cking own a halfway decent watch!

Prosecution: …Then how do you explain the abuse of power part? You’re persecuting the investigator!

Defense: The Chief’s defection was my blunder in terms of our national interest, but I committed no crime. You’ve been suggesting that it was I who deliberately framed the General and forced him to defect. Is that what you mean? I don’t deserve this accusation! But since we are already here, I’m not afraid to show you the skeletons in my closet.

Defense: Chief Wang, had a crush, on my wife! I even found letters confessing his love!!!

F*ck me… it’s been so many years… do you all know how hurt I felt… my wife has always been… been flirting with him… I am a government official… we’ve been like brothers for years. What a shame for the family…!!!

We’ve been married for 27 years and we are really in love. But my wife just flirted with him and there was nothing substantial. Even if I was not happy with it, I didn’t have anything to say. Besides, I also had an affair. What standing did I have…

Do you know why I beat him? He was in love with my wife for sure, yet he sent his subordinates to report her! Yes! I believe it was him! What in the world is that? I have endured so much for him, yet he goes and does this!

So I’ll tell you, Wang Lijun has no conscience! Why did he flee? Because he was up to something! He broke my family, seduced my wife, then turned his back on her! He’s jealous of me! How can you trust what he says? How!!

Judge (wiping sweat): Um… Please, stay calm. Does the prosecution have anything to say?

Defense: You made a woman testify against her own husband, and you think I’m the immoral one?

Prosecution: Your Honor, you’ve been wonderful. Ladies and gentlemen, surely to can see that we have sufficient evidence. The defense has committed serious crime and terrible evil. Justice will prevail~

Defense: Your Honor, you’ve been magnanimous. The guys here in Shandong are good and pure, and have treated me well. I haven’t suffered any serious wrong at their hands. I was not able to control my wife and son, nor could I control my friends. I, I think I’m a big failure. But, no matter how I treated the common folk, they all know the score. I am an old man–I don’t have much time left to change my life. My dear wife, at this point, I don’t have much to say to you. I don’t blame you either, really.