What Is China Doing in Africa? 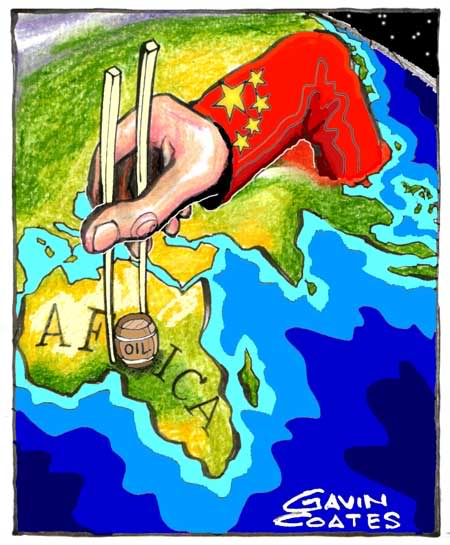 […In] Chad, officials have taken a harder line with China National Petroleum, reflecting a growing confidence after 10 years of oil production that has brought the country new roads and public buildings, a revamped army, and a strengthening of the government’s grip on power, though little change in the country’s low poverty ranking.

The country’s oil minister shut down the Chinese operations in mid-August after discovering that they were dumping excess crude oil in ditches south of the capital, N’Djamena, then making Chadian workers remove it with no protection.

[…] “Regardless of the actual spillage, which the Chadian government would normally not care much about, this seems to be a warning, which just goes to show that even the prototypical weak state in Africa can have serious leverage, and that African-Chinese relations are not as unbalanced as is sometimes argued,” said Ricardo Soares de Oliveira, a politics professor at Oxford and an expert on African oil. [Source]

At AllAfrica, Deborah Brautigam, Africa specialist and professor at Johns Hopkins University, argues that Western views of China as a predatory neocolonialist aggressively grabbing Africa’s land and minerals are flawed in other respects as well:

Chinese companies, like Western firms, are certainly interested in African resources, and sometimes, like Western firms, work in countries ruled by unsavoury regimes that do not respect human rights or elections. Yet, although a Hong Kong firm, PetroTrans, won an oil exploration concession, Beijing hasn’t bothered to look for oil in Ethiopia.

China’s largest economic partners on the continent include stable, democratic South Africa, Mauritius and Ghana, whereas Chinese firms have invested in banks, factories, telecoms and, more controversially, small shops. Chinese infrastructure projects are knitting the continent together, from wireless networks to roads and bridges.

Rather than “fear” the Chinese invasion, the West should take a more constructive and informed interest in what the Chinese are really doing to take advantage of Africa’s multiple business opportunities. We should assess more carefully the benefits and challenges of Chinese investment. And we should give Africans not just warnings, but more credit for taking their own development decisions. [Source]