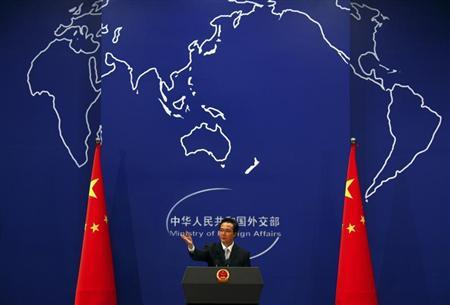 After Syria’s agreement to Russia’s request that the country put its chemical weapons under international control, Obama has asked Congress to delay their vote on his proposed military strike while Washington waits to see the results of the proposed diplomatic option. Reuters reports that China, long opposed to intervention in Syria, is in full support of Russia’s plan:

China said on Tuesday it backed a Russian proposal for Syria to hand over its chemical weapons for destruction, a plan that could avert planned U.S. military strikes in response to the country’s suspected use of its arsenal on civilians.

“As long as it is a proposal that helps ameliorate the current tense situation in Syria, is beneficial to maintaining peace and stability in Syria and the region, and is beneficial to a political resolution, the international community ought to give it positive consideration,” Hong said.

Hong added that a Syrian opposition delegation from the Syrian National Dialogue Forum was visiting China from Tuesday at the invitation of an academic group and would meet Chinese officials for a “deep exchange of views”. [Source]

The BBC rounds up comments similar to those made by the Foreign Ministry from China’s state media:

“This latest development brings a glimmer of hope for preventing a worst-case scenario being staged on the issue of Syria, while also preventing the international relations system suffering a major impact. China welcomes and supports Russia’s initiative,” says the People’s Daily, the Communist Party’s top official newspaper.

“As there are signs that Bashar al-Assad’s government might be willing to make concessions, the Obama administration should know denying international mediation a chance at this juncture would weaken its case for strikes even further. With little international support and the consequences of any military action unpredictable, acting alone would only reinforce the US’ image as a warmonger,” adds the China Daily. [Source]

As China remains resolute in its opposition to the Obama administration’s proposed military action, a U.S. official chose to play on Chinese concerns about North Korea’s stockpile of chemical weapons in hopes of gathering support for Obama’s plan. From AP:

Under Secretary of Defense for Policy James Miller, who was in Beijing to meet with Chinese officials, said a retaliatory strike against the Syrian government would uphold the international norm that chemical weapons must not be used.

Miller said he emphasized to his Chinese counterpart that lowering the threshold for chemical weapons use could put U.S. troops at risk and threaten China’s security and that of the entire globe.

“I emphasized the massive chemical weapons arsenal that North Korea has and that we didn’t want to live in a world in which North Korea felt that the threshold for chemical weapons usage had been lowered,” Miller told reporters at a briefing following his talks Monday with Wang Guanzhong, the Chinese army’s deputy chief of staff. [Source]

As the international community continues to debate potential military intervention in Syria, a recent ChinaFile Conversation allows experts to discuss China’s stance on the issue. Also see The Diplomat’s argument that China’s own insecurity is behind its opposition to intervention in Syria, or an analysis of China’s interests and the impact that a U.S. attack might have on U.S.-China relations from the Center for Strategic & International Studies.