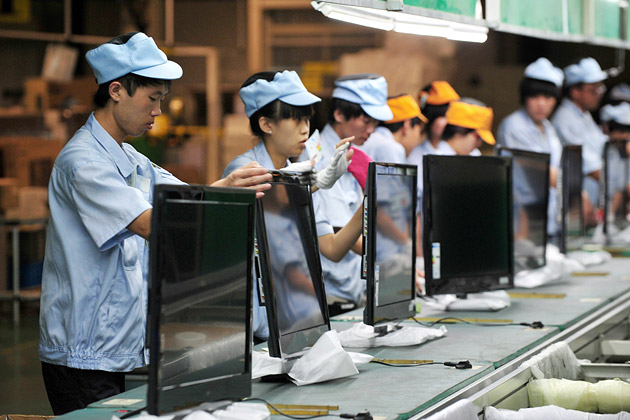 A 2006 graduate of Wuhan University in central China, Liu is not much older than the 20-somethings and late teenagers who come to work on the assembly line. But generational cohorts in China are extremely compressed, and Liu sees a vast gap in expectations between himself and those a decade younger. “When I finished school, I felt I needed to find a good stable job quickly and earn money,” he says. “But living conditions in China have improved quickly. Young people now don’t have to work so hard to earn a living, and many have parents who will support them. … A lot of those born in the 1990s can’t stand this kind of repetitive work, so they choose to stay home or do very simple cashier work, even though it pays less.” The upshot is that, for a small factory, it’s “getting harder to find workers.”

Last year the total size of China’s working-age population began to decline, according to figures from China’s National Bureau of Statistics. As the Economist ominously noted, China’s moment of “peak toil” has passed. Yet it’s not only demographics that are changing. Today’s Internet-savvy young workers have different ideas and higher expectations than their predecessors, and not only regarding pay. In response to an evolving workforce, factory managers at a handful of small and midsize plants in China’s Pearl River Delta say they must now offer better conditions to attract and retain workers—or else look for opportunities to automate. [Source]

Economic Observer’s Pang Lijing recently described the state of industrial automation in China, as Japanese and Swiss rivals duel for the Chinese market while authorities try to cultivate homegrown contenders.

[…] “As a leading global manufacturing powerhouse, China is experiencing labor shortages and a growing problem of rising labor costs year after year,” Wang [Weiming, a deputy director at the Ministry of Industry and Information Technology] said. “Within the past 50 years of industrial robot development, no country has ever had such a huge demand emerge in such a short period of time.” [Source]