The Enigma of Chinese Medicine 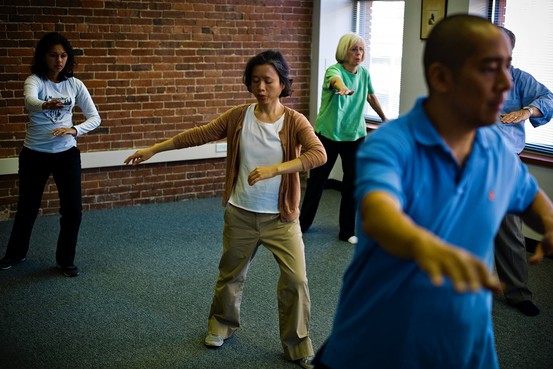 Laura Johannes writes at The Wall Street Journal that recent studies have discovered therapeutic properties of qigong, a traditional Chinese practice similar to the better-known taichi:

Traditionally, qigong is described as a practice that cultivates “qi,” or life energy. Qi can’t be measured objectively, says Shin Lin, a professor of cell biology at the University of California, Irvine. But his studies of qigong and tai chi practitioners have found a boost in both alpha brain waves, suggesting relaxation, and beta waves, indicating strong focus. “It has the dual benefit of relaxing you, but also sharpening your mind,” says Dr. Lin.

[…] Earlier this year, a three-month, 14-person study of depressed Chinese-Americans, who were offered one-hour qigong classes twice a week and encouraged to practice at home, found that 60% of those who took at least 15 classes saw a significant improvement in depression based on a standard rating scale. “One theory is that qigong helps people to relax and combat stress,” which tends to aggravate depression, says study co-author Albert Yeung, associate professor of psychiatry at Harvard Medical School in Cambridge. [Source]

A few years ago, while visiting Beijing, I caught a cold. My wife, who is Chinese, and wanted me to feel better, took me to a local restaurant. After we sat down, she ordered a live turtle. The proprietors sent it over. I startled as the waiters unceremoniously cut the turtle’s throat, then poured its blood into a glass. To this frightening prospect, they added a shot of baijiu, very strong grain alcohol. The proprietor and waiters, now tableside, gestured with obvious pride for me to drink the potent medicine. I winced, found the courage, and drank up.

[…] Chinese medicine holds that energy meridians mark the flow of a force called “qi” and this force is streaming throughout nature and our bodies — causing harmony and health or disharmony and illness (depending on the degree to which it is blocked or unblocked).

[…] It seems entirely reasonable to believe in the effectiveness of T.C.M. and still have grave doubts about qi. In other words, it is possible for people to practice a kind of “accidental medicine” — in the sense that symptoms might be alleviated even when their causes are misdiagnosed (it happens all the time in Western medicine, too). Acupuncture, turtle blood, and many similar therapies are not superstitious, but may be morsels of practical folk wisdom. The causal theory that’s concocted to explain the practical successes of treatment is not terribly important or interesting to the poor schlub who’s thrown out his back or taken ill. [Source]

See also, via CDT, a more skeptical take on TCM from Aeon magazine by James Palmer, who describes it as “an odd, dangerous mix of sense and nonsense.”