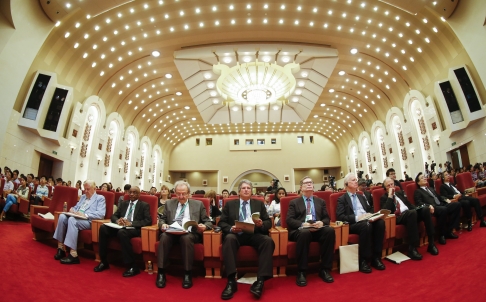 With China’s multitude of college graduates poised to keep growing and their post-graduation job prospects looking bleaker than ever, many of China’s youth are seeking careers in public service to increase both job security and prestige. At the Nobel Laureates Beijing Forum this week, winner of the 2006 Nobel Prize in Economics Edmund Phelps lambasted China’s “public servant frenzy” as a waste of talent. From the South China Morning Post:

An American Nobel Laureate in Economics has lashed out at the “public servant frenzy” prevalent among young people in China, calling it a waste of talent.

Edmund Phelps, winner of the 2006 Nobel Prize in Economic Sciences, said that government posts are not designed for young people and that they do not test young people’s capabilities and are a waste of their education, commenting on the growing numbers of young people in China applying to become civil servants.

“We hope to see more bright young men telling their mothers, ‘Mom, I am heading west, south and north to run a company,’” The Beijing News quoted him as saying, as the economist encouraged young people to start businesses away from China’s more prosperous eastern region.